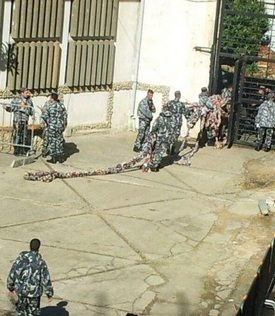 Special army units negotiated on Thursday with Islamists at Roumieh prison the handing over of two inmates accused of killing G. al-Qandaqli.

"The army had warned that it will storm bloc B of Roumieh if the accused were not handed over,” MTV reported.

Radio Voice of Lebanon (100.5) had said the army forces were preparing to invade bloc B to confiscate all tools that were used in the latest escaping attempt at the prison.

“Judge Fadi Zaenni discussed with the head of Fatah al-Islam at the prison the possibility of peacefully entering the building,” RDL revealed, adding that Zaenni also investigated the circumstances surrounding the killing of G. al-Qandaqli .

"The medical reports said the victim was beaten up violently while his murderers tried to cover the crime by tying a piece of cloth around his neck,” the report said, explaining they wanted the incident look like a suicide.

The army had deployed its forces inside bloc B of the prison to prevent any operations threatening stability and to continue its investigation, looking for any prohibited smuggled into the prison.

A massive escape attempt from Roumieh prison was thwarted on Many after guards found ropes linking the observation tower to the facility's outer wall. The inmates had lowered four 17-meter ropes from the tower to the outer wall of the building where convicts are incarcerated.

Last month, guards thwarted an attempt by around 20 Fatah al-Islam inmates to escape from Roumieh, the oldest and largest of Lebanon's overcrowded prisons.

In October, a scandal erupted after it was reported that three Fatah al-Islam prisoners fled the jail the month before.

In another major prison break from Roumieh, five inmates from the terror network managed to escape in August 2011.

I don't know if I should laugh or cry!

Usually, a prison purpose is to lock-away and re-habilitate criminals. A prison should be a high security place, where neither weapons nor equipment can be smuggled in to help inmates escape. After many murders and escape attempts you would think that the security forces would finally get it right as to maintain security in the infamous Block B . Yet again we hear of escape attempts and the security forces threatening to storm the Block B if the inmates don’t hand over the accused of prisoner murder (notice the similarity with terms used when dealing with criminals in Palestinian camps).

this reminds me of the negotiations with the Miqdads when they kidnapped foreigners in lebanon...they should be gased as well...

Umm no, not the same. Moqdada that kidnapped are backward thugs... Fatah Islam members are brainwashed, uneducated, sectarian killers. They deserve death on sight. Any salafi or tikfiri should be shot on site.

No kiserwanimoughadram they should arrest people like you then use cheap gas on them .When finish start on the likes of Asir ..

Just gas them or pound them

Who the hell is giving them protection?!?!?! Wtf!! How do they get so many privileges in jail?!

What do you mean "confiscate all tools that were used in the latest escaping attempt at the prison"?
They still have them?
Why is this allowed and how did they get them in the first place?
Is this a kindergarten joke?