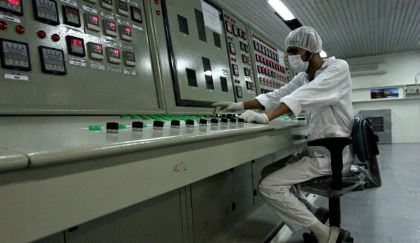 Exiled former Iranian lawmakers on Thursday proposed a compromise to avert conflict over Tehran's nuclear program, calling for an end to sensitive uranium enrichment and an easing of U.S.-led sanctions.

In a letter sent to U.S. President Barack Obama, Iran's supreme leader Ayatollah Ali Khameini and the European Union, the seven ex-MPs said that a solution to the crisis was possible if all sides sought a "win-win" outcome.

The former lawmakers, who support greater freedoms inside Iran, proposed that the clerical regime halt enrichment of uranium of fissile purities of 20 percent, a level that could be used for a nuclear bomb if further enriched.

Iran would put its 20-percent stockpile under monitoring of the U.N. International Atomic Energy Agency, which would carry out inspections of the nuclear program.

Iran would enjoy the right to enrichment at lower levels as well as guarantees of sufficient fuel to research reactors for peaceful use.

In turn, the United States and five other nations negotiating with Iran -- Britain, China, France, Germany and Russia -- would lay out a clear timetable to ease sanctions that the lawmakers said have caused pain in the country.

Fatemeh Haghighatjoo, a former reformist member of the Iranian parliament who lives in Boston, said that the sweeping Western sanctions helped bring Tehran to talks but doubted they would change the regime's behavior further.

"We know how these sanctions actually hurt. Even people can't get enough medicine," she said at the Woodrow Wilson Center for International Scholars.

"Anti-West sentiment will be increased if sanctions keep continuing and we will gradually lose this social capital" of the population's positive feelings toward the West, she said.

Ali Akbar Mousavi, another former reformist lawmaker who lives in the United States, said Khamenei "needs at least a small victory," such as official Western recognition of the right to enrichment at purely civilian levels.

"He wants to say to competitors... 'Look, I won and you lost,'" Mousavi said.

The United States has voiced disappointment over Iran's response to international talks and has steadily ramped up sanctions, including trying to ban all exports of oil, its key source of foreign exchange.

U.S.-ally Israel has refused to rule out a military strike, and American officials have repeatedly said they will do whatever it takes to stop Iran getting a nuclear weapon.

Iran says that its program is for peaceful purposes. U.S. intelligence has not concluded that the regime has taken the decision to build a nuclear bomb.