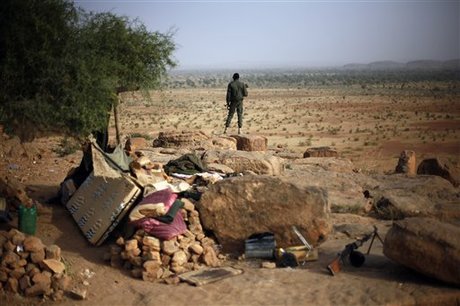 Islamist fighters have dynamited a strategic bridge near the Niger border on the road to Gao, one of the main towns in northern Mali occupied by extremists, sources said Friday.

A security source from neighboring Niger confirmed the bridge's destruction.

"Since this morning, no vehicle has left the border for Gao because the Islamists destroyed the Tassiga bridge with dynamite. No one can pass anymore," he said.

Tassiga is a Malian town situated 60 kilometers (35 miles) from the Niger border.

The destruction of the bridge comes as 2,000 Chadian and 500 Niger soldiers are planning to enter eastern Mali from Niger to open up a new front against the Islamists who have occupied northern Mali for 10 months.

French warplanes that have bombarded Islamist positions for two weeks in a bid to oust the extremists struck their bases in Ansongo, 40 kilometers from Tassiga on the road leading to Gao, on Wednesday night.

French and Malian troops were also carrying out patrols in the area.

Meanwhile, Mali's military has made its farthest push east toward the Islamist stronghold in Gao.

Residents in the town of Hombori said Friday that Malian soldiers were seen arriving there the night before.

Hombori is located 150 kilometers beyond the current line of control in Douentza, which government forces reclaimed earlier in the week.

The push puts the military just 250 kilometers away from Gao, one of the three main northern cities held by Islamists since last April.