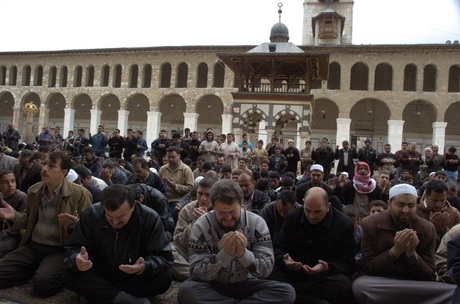 A large number of Syrians on Friday heeded a call by the authorities to join weekly Muslim prayers for security and gathered in mosques across the country, the state news agency SANA said.

"Popular participation was broad in the prayer in mosques across Syria for the return of safety and security to the homeland," SANA said, a day after a Muslim feast in which the authorities called for a "million-man prayer."

"O God, we implore you... in our distress. We beg you not to forget us. We ask for your kindness, and for peace and safety across our Syria. We ask for a miracle of your many miracles, to cleanse our country from oppression and of those rogues who commit injustice, murder and slaughter," he said.

The sheikh also recited a prayer for President Bashar Assad.

"Give your servant (Assad) success on his good path," he said, and called for national unity in the strife-torn country.

"Neither religious differences nor the enemies of religion will separate us," he said.

Elsewhere on Friday, protesters in flashpoints across Syria held demonstrations calling for the fall of Assad under the slogan: "Our leader for ever, the Prophet Mohammed."