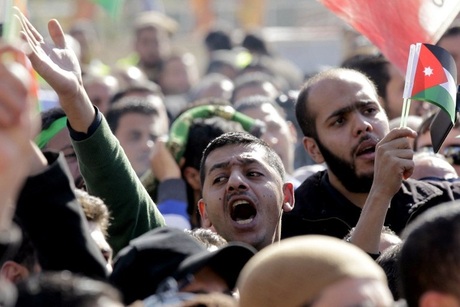 Protests in Jordan against the results of a general election turned violent on Friday injuring four people, and forced police to fire tear gas to disperse demonstrators, an official said.

Preliminary results from Thursday's election showed tribal leaders, pro-regime loyalists and independent businessmen are set to sweep Wednesday's election in Jordan, where the prime minister is chosen by the king.

Observers from the European Union earlier on Friday praised as "transparent and credible" the Jordanian general election, after the Islamist opposition alleged it had been marred by fraud.

"Polling, counting and tabulation of results in the 23 January parliamentary election were, despite minor glitches, well-administered," said David Martin, head of the 80-strong EU mission.

On the downside, Martin said that "substantial deficiencies in the election law affect, however, universality of voter participation and equality of votes."

King Abdullah II vowed on Friday to pursue democratic reforms after the "landmark" vote, and to reach out to groups like the Muslim Brotherhood that boycotted the election.

Speaking at the World Economic Forum in Davos, the king hailed the election as an important step forward and said authorities would now work to build a party-based political culture in Jordan.

"I think the easiest part... is behind us. Today the challenge in creating this parliament is trying to create parties with political party platforms," he said.

The Muslim Brotherhood said King Abdullah's plans for a parliamentary government fell far short of true democratic change and that he should have no say in naming a premier.

"Vote-buying and fake voter cards were very clear. We will prove that our boycott was the right decision," Zaki Bani Rsheid, deputy leader of the Brotherhood, told AFP.

But the Independent Election Commission insisted on Thursday that its figures were accurate.

Analysts said the new Jordanian parliament would be dominated by loyalists who would resist pressure for any real political reform.