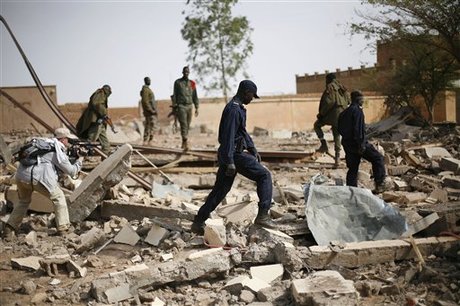 French fighter jets bombed the far northern Islamist stronghold of Kidal in Mali and destroyed the home of the head of an al-Qaida-linked group, a security source said.

"There were air raids on Islamist bases in Kidal," 1,500 kilometers (940 miles) north of the capital Bamako, a Malian security source said, adding that the home of Ansar Dine (Defenders of the Faith) chief Iyad Ag Ghaly was destroyed.

"The French planes fired on a military camp at Kidal and destroyed Iyad Ghaly's home. There were also strikes by French warplanes to the west of Kidal, not far from the village where Iyad Ag Ghaly was born," the official said.

Kidal has been a bastion of Ansar Dine, whose leader Iyad Ag Ghaly is a former soldier and a Tuareg ex-rebel, who formed the group last year.

In April last year after a coup in Bamako, an alliance of Tuareg rebels seeking an independent homeland in the north joined forces with several Islamist groups, seizing Kidal first and then the northern towns of Gao and Timbuktu.

The Islamists quickly sidelined the Tuaregs, imposing a harsh version of Islamic sharia law in the region. Transgressors were flogged, stoned and executed, they banned music and television and forced women to wear veils.