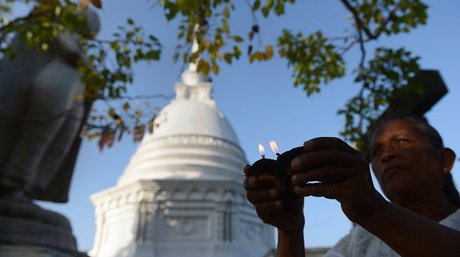 President Mahinda Rajapakse met with monks with the group known as "Bodu Bala Sena", or Buddhist Force, and urged them to help maintain religious harmony in a country emerging from decades of ethnic violence, according to a statement released by his office.

"It is okay to work to strengthen the Buddhist religion, but it should be done without creating conflicts with other religions," the statement quoted the president as saying.

The Buddhist Force had disassociated itself with a spate of recent hate attacks against Muslims and public insults against Islam, and claimed that several "duplicate groups" were pretending to be them, the statement said.

The group has been campaigning for a ban on halal meat that is permissible for Muslims to consume, but the government has resisted.

Sri Lanka ended its 37-year Tamil separatist war in May 2009 with the crushing of Tamil rebels who were mainly Hindus, who constitute about 12 percent of the population. The ethnic war claimed an estimated 100,000 lives.

Where ever Buddhism ; there is always turmoil
Burma,Thailand , Cambodia, Bali , Vietnam Indonesia

This man - the President is playing politics with the sovereignty of Sri Lanka. Spread of Muslim culture and religion has to be curbed at any cost - let it be blood letting or otherwise. This is becoming a sore or a cancer that has no cure.

You are wrong. The Bodu Bala Sena is not protesting against putting Halal label on meat. {They do not care about meat. In fact they are against eating any meat by anyone as it is harming living beings.} But pressuring businesses to put Halal label on things like Bottled Water, Yoghurt and Packeted Tea etc. Businesses have to pay money to an Islamic body to obtain that label and that money is being used to propagate Islam.

I'm a Sinhala Buddhist and I have to admit that some of the talks by these new young people wearing robes embarrass me as a Buddhist. One of the few good moves from MR

The Muslims of Sri Lanka have lived for more than a thousand years with the Sinhalese and the Tamils in peace and harmony. There weren’t any Muslim conquerors that came to Sri Lanka in our island’s history. And always Sri Lankan Muslims had a very good understanding with the ancient rulers. We see in history, some of Muslims worked for the Sri Lankan rulers as personal doctors, ambassadors, tradesmen and also members of personal bodyguard unit of these kings.Now these newly born extremist religious leaders are trying to separate us. God seeing all, when they get caught to God's grip then no way out, beware.