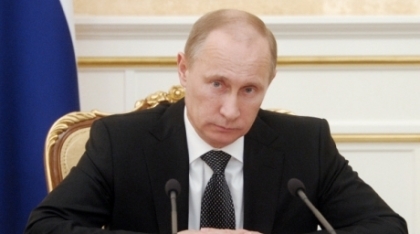 Russia on Monday replaced the leader of Dagestan, a volatile region in the Northern Caucasus where federal forces are struggling to contain a growing Islamist insurgency fueled by corruption and poverty.

President Vladimir Putin relieved Dagestani leader Magomedsalam Magomedov of his post and appointed ruling party lawmaker Ramazan Abdulatipov acting head of the region on the shores of the Caspian Sea, the Kremlin said in a statement.

The Kremlin said Magomedov, 48, had left the post of "his own volition", but experts say he was forced out of the job he had held since 2010.

Observers say Magomedov, the son of former Dagestani chief Magomedali Magomedov, had been seen as a weak leader who was unable to bring about order in the region.

"The amount of bribes has dramatically increased over the past years," Shvedov told AFP.

That sentiment was echoed by Gadzhimurad Omarov, head of the regional branch for leftist political party A Just Russia, who said resentment against Magomedov ran deep in the region of nearly three million.

"Dagestan is mired in chaos and anarchy," Omarov told AFP. "Rank-and-file, simple Dagestanis have been waiting for it," he said, referring to Magomedov's departure.

Over the past few years the region has seen a spate of violent crimes that critics say Magomedov was unable to stop.

He fared especially poorly compared with fellow Caucasus leaders Ramzan Kazyrov, who rules next-door Chechnya with an iron fist, and Yunus-Bek Yevkurov, a former paratrooper who security analysts said managed to bring a degree of stability to conflict-torn Ingushetia.

Chechnya was the scene of two separatist wars over the past two decades but violence in the region has moved to Dagestan in recent years.

The overwhelmingly Muslim republic, which is famously home to dozens of ethnic groups and languages, experiences almost daily shootings and bombings that officials blame on local criminals and Islamists with links to Chechnya.

Driven by endemic poverty and aided by rampant corruption, the militants are seeking to establish an independent Islamic state across the Northern Caucasus.

In 2011, a gunman shot dead leading local journalist Khadzhimurad Kamalov, who founded a newspaper known for fearless criticism of the local authorities.

Last August, the region was shocked by the murder of one of its most revered religious teachers, Said Afandi.

Yulia Latynina, an opposition political observer who writes extensively on the Caucasus, said that Salafism, an ultra-conservative interpretation of Islam, is no longer a marginal movement under Magomedov.

"Even a few years ago something could have been done. Right now, in my opinion, nothing can be done about it."

"The situation in the republic has become irreversible in nature," she said on Echo of Moscow radio on Saturday.

"No matter who you appoint there, sooner or later Dagestan and possibly the entire Russian Caucasus will become an Islamist state," she said.

In a sign that the danger of the unrest spilling out of control is not lost on the Kremlin, Russia plans to scrap popular elections after briefly toying with the idea of reintroducing elections for governors last year.

In an interview this month, Ingushetia's leader Yevkurov spoke out against popular elections for governors, saying Russia's regions were not ready to elect their own heads.

Elections lead to "corruption of society", he said in the interview with Kommersant daily.

Magomedov has been named deputy Kremlin chief of staff.