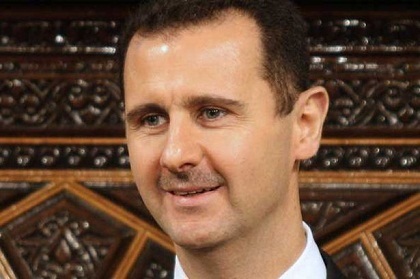 Syrian President Bashar Assad said his troops have gained the upper hand against rebels in the 22-month conflict and could win in "two weeks" should Turkey stop its support for insurgents, a Lebanese newspaper reported Monday.

"The army has a very large lead on the ground and has achieved significant gains," Assad told "visitors" at his palace in Damascus, al-Akhbar, a pro-regime Lebanese daily reported without identifying who the visitors were.

Assad emphasized that the military had prevented the opposition from taking full control of any of the country's 14 provinces.

The rebels' "playground is limited to some border areas with Turkey, Jordan and Lebanon, and some pockets in the countryside of the capital, which are being dealt with," he said.

"The situation in the capital has improved and strategic areas, especially the airport road, are secure despite insurgent attempts.

"If the Turkish border was closed to tackle the smuggling of arms and militants, this matter would be resolved in only two weeks," Assad said.

Since the Syrian uprising erupted in March 2011 and later turned into a civil war, the regime has accused Ankara of funding and providing a safe haven to rebel fighters.

Assad said that "armed groups financed from abroad have been dealt severe blows of late."

"The United States has included the Al-Nusra Front on its list of terrorist organizations, and this move will be followed by the full liquidation of this Al-Qaida branch."

Assad said Russia -- which still holds military contracts with Syria and opposes foreign intervention in the conflict that the U.N. says has killed more than 60,000 people -- will not withdraw support.

Moscow "defends itself, not the Syrian regime," he said of his key ally, the newspaper reported.

Russian Prime Minister Dmitri Medvedev acknowledged on Sunday that Assad's chances of political survival were shrinking by the day and said the Syrian leader had made a "grave, perhaps fatal error" in refusing to negotiate with opposition early on.

Assad told the visitors that during talks with U.N. peace envoy to Syria Lakhdar Brahimi in December, the diplomat had asked him about the possibility of stepping down before the end of his term in 2014 as part of a transitional agreement.

"The president cut off the discussion and made it clear that the only way to end the conflict was by resolving the situation on the ground, which is improving by the day in favor of the regime," the visitors said, according to al-Akhbar.

In a rare speech on January 6, Assad proposed a peace plan but did not express any willingness to step down.

... Assad told "visitors" at his palace in Damascus, al-Akhbar, a pro-regime Lebanese daily reported without identifying who the visitors were.

in a related story General Michel Aoun will confirm during his weekly news conference/comedy routine tomorrow, while munching on fresh Baraze2, that the insurgency in Syria will be over by next Tuesday.

This man is delusional. His supporters are either idiots or too scared of the alternatives now that he destroyed the country.

I feel frustrated at the protracted conflict and the carnage involved. I wish Assad had sewn this up months ago. But he's contending with a savage bunch of mercenaries, backed by Syria's many enemies. I'm pretty confident, though, that the terrorist scums will be eventually routed and normalcy restored in Syria.

I'm frustrated by the ceaseless violence and the Syrian Army's inability to sew up the war, months ago. But I realise that they are dealing with a bunch of savage mercenaries, backed by Syria's many domestic and foreign enemies. I'm pretty sure, though, that Assad will eventually manage to have these terrorists routed, and try and restore normalcy again in Syria.

I guess we know which category you belong to. We are not worried about the future of Syria. We just love you Hitler - ahem Bashar.

"The army has a very large lead on the ground and has achieved significant gains,"

the exact same words losing leaders say to reassure their people.... meaning they are on the verge of collapse

Dream on lovethekiller.... Your just as delusional!

I don't approve your message love4bashar !!!