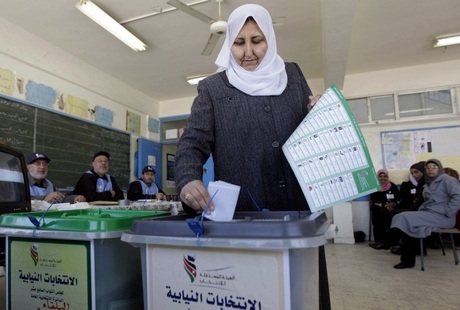 The final results on Monday for Jordan's general election held last week saw tribal leaders, pro-regime loyalists and independent businessmen sweep to power after a boycott by the Muslim Brotherhood.

"The Independent Election Commission board has approved the parliamentary election's preliminary results, officially endorsing them as the final results," the IEC said.

"Twenty sub-committees have examined and double-checked the results, completing their work on Sunday night."

In the face of opposition charges of vote-buying, IEC head Abdul Ilah Khatib acknowledged the election held last Wednesday was "not completely free of some violations and problems."

"Elections cannot be perfect and we hope to learn from this experience and improve on it," Khatib told a news conference. "But generally Jordanians have accepted the voting measures and exercised their right."

King Abdullah has vowed to pursue democratic reforms after the vote and to reach out to groups like the Brotherhood.

"I think the easiest part... is behind us. Today the challenge in creating this parliament is trying to create parties with political party platforms," he said on Friday at the World Economic Forum in Davos.

Scoffing at the official turnout figure and alleging vote buying, Islamists have said the king's plans for a parliamentary government fall far short of true democratic change and insist he should have no say in naming a premier.

"The election was held in the absence of national accord and in line with an undemocratic and unconstitutional law. Plans for parliamentary government are pure fantasy," said the Brotherhood's political arm, the Islamic Action Front.

"A national salvation government including figures trusted by the public is needed for dialogue on reform and to get the country out of the current crisis."

At least three candidates accused by the authorities of vote-buying won seats. Their cases are still before the courts and if found guilty, they will lose their seats and face several years in jail.

Analysts say the new Jordanian parliament would be dominated by loyalists who would resist pressure for any real political reform.

International experts who observed the election praised some improvements but warned that tribalism challenges the king's reform efforts.

A total of 1,425 candidates, including around 140 former MPs and 191 women, contested the 150 seats in parliament's lower house.