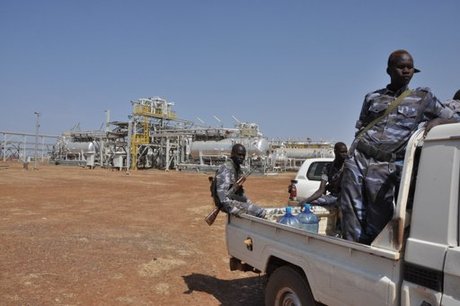 At least five people were killed in South Sudan's troubled Jonglei state in clashes between government troops and rebel soldiers who had come for peace talks, officials said Monday.

Hundreds of civilians fled the clashes which broke out Sunday -- during which the market in the remote town of Pibor was set on fire -- as a government delegation arrived to negotiate with the breakaway commander of a local rebel movement.

"The soldiers went around and burnt all the houses, the shooting erupted everywhere," said John Tubuwa, a priest who was part of the delegation.

South Sudan army spokesman Philip Aguer said that one soldier and one rebel coming for the talks had been killed, while residents said that at least three civilians had died.

"The numbers could still go up... we are now searching for the dead and wounded," Pibor County's former human rights commissioner Peter Gazulu told AFP on Monday, adding that the town was now calm.

One elderly man was burnt alive inside his home, as soldiers and rebels formerly loyal to local insurgent David Yauyau clashed, said Gazulu.

United Nations peacekeepers, who have a base in Pibor, said that "large numbers, possibly thousands, of civilians" had sought refuge in their camp.

The rebel faction, under the command of James Kuberin, were reported to have fled into the bush surrounding Pibor town.

The eastern state of Jonglei is struggling from a spate of ethnic killings, a rebellion and an army crackdown.