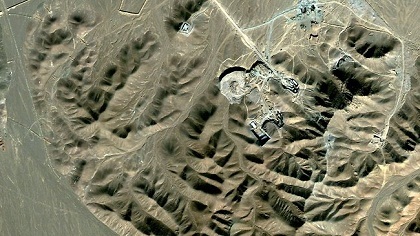 Iran has strongly denied reports of an explosion at its Fordo underground atomic site as "Western propaganda" ahead of stalled nuclear talks with major powers, media reported on Monday.

"No explosion has occurred in the Fordo facility," the deputy head of Iran's Atomic Energy Organization, Shamseddin Bar Boroudi, was quoted as saying.

A top lawmaker in charge of Iran's national security commission, Aladin Borujerdi, said: "The false news of an explosion at the Fordo site is Western propaganda ahead of nuclear negotiations to influence its process and outcome."

The denials came after Western and Israeli media reports citing an American website, www.wnd.com, said an explosion at the Fordo facility on January 21 had caused major damage and trapped workers.

There has been no comment from the U.N.'s nuclear watchdog agency that monitors activities in Iran, which the West suspects of trying to develop the bomb.

Iran has on several times accused Israel and the United States of taking action to sabotage its nuclear program, through assassinations of its scientists and unleashing computer malware against its facilities.

The sensitive nuclear Fordo site is dug deep into a mountain near the holy city of Qom, some 150 kilometers (90 miles) south of Tehran, to protect it against air strikes.

But the site, Iran says, has been targeted by sabotage.

Iran's nuclear chief, Fereydoon Abbasi Davani, said in September that "explosives" were used to cut the power supply to Fordo, without naming those responsible.

The site, whose existence was revealed by major powers in 2009, began in late 2011 to enrich uranium to purities of 20 percent, a process that lies at the heart of the international community's concerns.

World powers have engaged Tehran several times to resolve concerns about its atomic ambitions, which Iran insists are peaceful.

The last round of talks with the the so-called P5+1 -- the United States, Britain, China, France, Russia -- held June in Moscow ended with a stalemate, as did previous rounds.

The sides have failed to agree on a new round of talks, blaming each other for uncertainty over a date and venue.

Iran is under sanctions designed by the United States, the European Union and the U.N. Security Council to pressure it to curb its controversial nuclear program.

Israel, the sole but undeclared nuclear state in the Middle East, has refused to rule out a military strike to prevent Iran from obtaining nuclear arms.