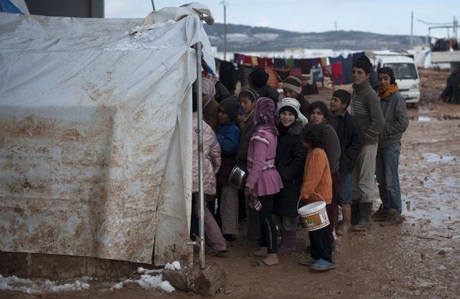 The United Nations will be forced to cut already reduced food rations to hundreds of thousands of Syrians unless a huge cash injection is found, a top humanitarian official warned Monday.

U.N. agencies have already cut the nutritional value of rations by a half over the past two months because of money shortages, U.N. humanitarian operations director John Ging said ahead of a donors conference in Kuwait on Wednesday.

"We are putting it squarely to the donors, more cuts are likely," Ging told reporters.

About four million Syrian rely on international assistance to cope with fallout from the 22-month old conflict in which the U.N. estimates more than 60,000 people have died. Many of them get daily food rations.

U.N. leader Ban Ki-moon will seek more than $1.5 billion in new cash pledges at a donors conference in Kuwait on Wednesday. About $500 million is needed for operations in Syria and the rest for more than 650,000 refugees in countries around Syria.

"We have already cut the calorie per kilo intake of rations by 50 percent over the past two months," he said.

With the U.N. and private aid agencies facing criticism from opposition groups over the allocation of assistance, Ging said aid workers were putting paper messages in the food rations to say that amounts had been cut because of funding shortages not political reasons.

Some opposition groups have accused agencies of channeling aid money through President Bashar al-Assad's government. But Ging said "not a dollar" of U.N. money goes to the government.

During a visit to the Zartari refugee camp in Jordan on Monday, World Food Program director Ertharin Cousin said the increased number of Syrians fleeing their country is straining resources.

"We have sufficient supplies of food in stock in Jordan to cover the needs of around 100,000 Syrian refugees for a month, but we need urgent funding to continue providing assistance after that," said Cousin.

WFP needs $132 million to continue its operations in Jordan, Lebanon, Iraq, Turkey and Egypt, where it is feeding 250,000 refugees, until June 2013, the official added.