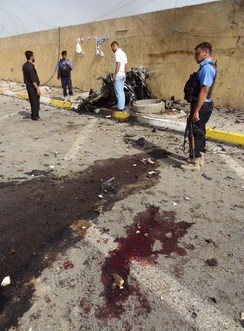 Attacks in Iraq killed three people and wounded six others on Monday, as the country grapples with more than a month of anti-government rallies and a political crisis, officials said.

In separate incidents in Baghdad, gunmen killed a soldier and the bodyguard of a Shiite member of parliament, security and medical officials said. One soldier was also wounded in the violence.

North of the capital, a neighborhood chief was killed in a bomb attack in the disputed city of Kirkuk, while another blast wounded three people in Baladruz in restive Diyala province, also north of Baghdad.

A rocket attack in the predominantly Sunni town of Fallujah, west of the capital, left two soldiers wounded.

No group claimed responsibility for the attacks, but Sunni insurgents often launch such assaults in an attempt to destabilize the government and push Iraq back into the sectarian bloodshed that blighted it between 2006-2008.

Violence in Iraq is down from its peak, but attacks remain common.

The unrest comes amid weeks of anti-government protests in Sunni-majority areas of Iraq and a political crisis that has pitted Prime Minister Nuri al-Maliki against several of his erstwhile government partners less than three months before key provincial elections.