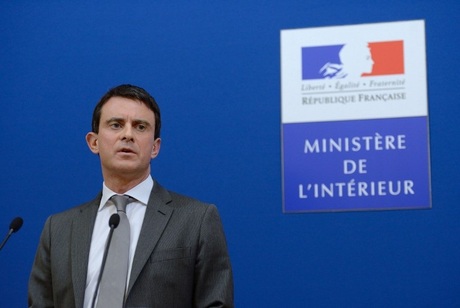 French Interior Minister Manuel Valls said Tuesday that Paris is set to deport a string of radical religious imams as part of a fight against "global jihadism".

"Several radical foreign preachers will be expelled in the coming days," Valls told a Brussels conference called to tackle extremism in Europe, without identifying any of the individuals concerned.

"I don't confuse this radical Islam with the Islam of France but there is a religious environment, there are Salafist groupings, who are involved in a political process, whose aim is to monopolize cultural associations, the schooling system," he added.

"We will expel all these imams, all these foreign preachers who denigrate women, who hold views that run counter to our values and who say there is a need to combat France.

"We have to be extremely firm and that I will be," he said.

extremism should be fought at all levels.
should we decide to do so, we would become a country.
all religious extremists should be sidelined by society, and that can happen in a country like France because it is secular.
in Lebanon we are unable too get consensus to implement civil marriage, which allows religious people to control a major part of our life.
religious people role is restricted to matter of the soul and not to meddle in every part of our life.

i wish we could expel them too.