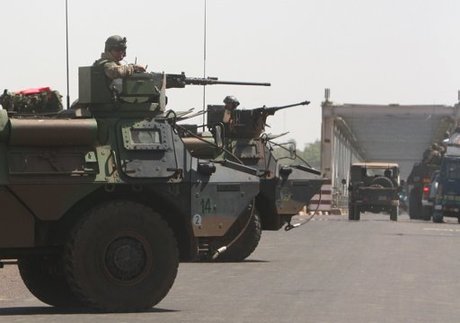 French troops on Wednesday entered Kidal, the last Islamist bastion in Mali's north to be recaptured in a whirlwind Paris-led offensive amid reports the radicals have regrouped in remote hills near Algeria.

Their arrival in Kidal comes days after the capture of Gao and Timbuktu in a three-week offensive that Paris now hopes to wind down and hand over to African troops.

Several sources reported earlier that French troops had landed at the airport of Kidal.

"We confirm that French aircraft are on the Kidal landing strip and that protection helicopters are in the sky," said a regional security source.

A spokesman for the breakaway Islamic Movement of Azawad, which recently announced it had taken control of the town, said its leader was speaking to the French who landed at the airport.

Kidal lies 1,500 kilometers (930 miles) northeast of the capital Bamako and until recently was controlled by the Islamist group Ansar Dine (Defenders of the Faith).

Last Thursday however, the newly formed group announced it had split from Ansar Dine, that it rejected "extremism and terrorism" and wanted to find a peaceful solution to Mali's crisis.

Ansar Dine and two other Islamist groups took advantage of the chaos following a military coup in Bamako last March to seize the north, imposing a brutal form of Islamic sharia law. Offenders suffered whippings, amputations and in some cases were executed.

France swept to Mali's aid on January 11 as the Islamists advanced south towards Bamako, sparking fears that the whole country could become a haven for terrorists.

"The re-establishment of law and order in northern Mali has started. That's good news and we will carry on.

Several reports say the main Islamist chiefs, Iyad Ag Ghaly of Ansar Dine and the Algerian Abou Zeid of Al-Qaida in the Islamic Maghreb (AQIM), have retreated to the mountains in the Kidal region, which borders Algeria and Niger.

In the face of ground strikes and devastating air bombings that destroyed their headquarters in Timbuktu as well as their fuel supplies and armory, the Islamists had no choice but to flee.

But the lack of resistance for the moment does not mean they have been neutralized, said Alain Antil, the head of sub-Saharan affairs at the French Institute of International Relations.

"They can turn to classic guerrilla tactics including harassment, rapid attacks with kidnappings and bombings," said Antil.

"They will regroup and re-position themselves in Libya, Algeria and Tunisia. It's above all an international network," said Souleimane Mangane, a Malian specialist on Islamist movements.

The U.N. refugee agency reported that food, clean water and fuel were scarce in both Kidal and Tessalit, further north.

"Hundreds of people are reported to have fled Kidal in recent days to villages further north, even closer to the Algerian border," said the UNHCR.

"Others have crossed into Algeria, despite the border being officially closed."

In Timbuktu on Tuesday, a day after the troops drove in to an ecstatic welcome, hundreds of people looted shops they said belonged to Arabs, Mauritanians and Algerians accused of backing the Islamists.

Experts in the city are still trying to assess exactly how many of the city's priceless ancient manuscripts dating back to the Middle Ages were destroyed when fleeing Islamists set fire to the building housing them.

But Shamil Jeppie, Timbuktu Manuscripts Project director at the University of Cape Town in South Africa, said more than 90 percent of the ancient books and manuscripts housed in Timbuktu were smuggled away before Islamists overran the city last year.

At a donor conference in the Ethiopian capital Addis Ababa Tuesday, African leaders and international officials pledged more than $455 million (340 million euros) for military operations in Mali and humanitarian aid.

Lack of cash and equipment has hampered deployment of nearly 6,000 west African troops under the African-led force for Mali (AFISMA) which is expected to take from the French army.

"Freeing Gao and Timbuktu very quickly was part of the plan," he said. "Now it's for the African countries to take over."

So far, just 2,000 African troops have been sent to Mali or neighboring Niger, many of them from Chad, whose contingent is independent from the AFISMA force. The bulk of fighting has been borne by some 2,900 French troops.

Now lemme get this straight, you've been attacked by "devastating air bombing" and driven away from your positions and your fall back plan is regroup on a hill! Seriously? Hell why not wear bright shinny red uniforms and hold flares while jumping up and down so your less conspicuous!

Why should they have their virgins?
God will be upset if they turn away from him and follow the terrorists.