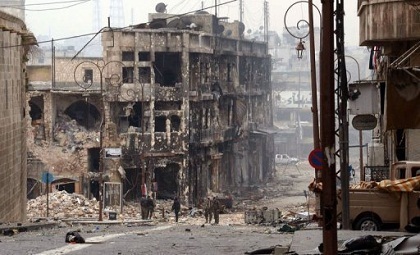 A senior Iranian official said Wednesday that those backing "terrorist" groups are responsible for the fighting and killings in Syria, as he repeated Tehran's support of the Syrian regime.

"Iran believes that the cause of the Syrian crisis is the sending of arms to terrorist groups into Syria by some countries," Amir Hussein Abdullahian, the Iranian foreign ministry's undersecretary for Arab and African affairs, told a press conference in Kuwait.

"Those who send arms into Syria are responsible for the killings," said Abdullahian who is heading Tehran's delegation to an international donors conference for Syria being held Wednesday in Kuwait City.

The United Nations says more than 60,000 people have been killed in the 22-month old conflict roiling Syria.

Abdullahian said the Islamic republic fully supports Syrian President Bashar Assad and his latest peace proposal and "believes that a political solution through national dialogue is the only way to resolve the Syrian crisis."

He added that Tehran "has always asked the Syrian government not to commit any acts of violence against the people."

Earlier this month, Assad presented a three-step plan to end the conflict, including an offer to hold dialogue with the opposition -- but only with elements he deemed acceptable and not rebel-affiliated groups.

Abdullahian said that Iran has donated $200 million in humanitarian aid to the Syrian people and also logistical assistance to Syrian refugees in Lebanon.

He further said that Iran would provide the "necessary assistance" in the form of a pledge at the Kuwait conference, without providing figures.

Iran has remained steadfast in its support of the Syrian regime which is attempting to crush a revolt that erupted in March 2011.

Looks like parts of Beirut still to this day :/

Yesterday i already read a news of Daily Star News Lebanon and others that the Kuwati emir announced firstly pledge the donation 300 million at the donor conference, I sent e-mail to Press TV as well. I am always impressed by the comment by the Iran initiative not to support foreign backed terrorists worsening the civil war in Syria. As a japanese I am so sad, while the government announce the donation, they address on 23 jan 2013 at the Security Council, "as a active member of friend of Syria" of it position. It is so different from my point of view after so many have been revealed. Differently, I am also impressed by unicef challenge to protect children in any area sound so important.