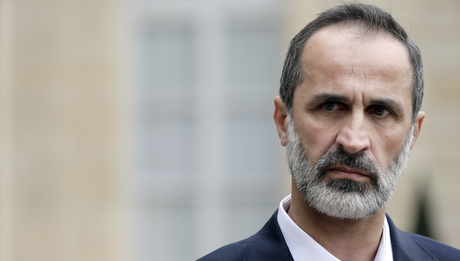 Syria's opposition chief Moaz al-Khatib said on Wednesday he is ready for dialogue with officials of President Bashar Assad's regime, subject to conditions including that detainees are released.

"I announce I am ready for direct discussions with representatives of the Syrian regime in Cairo, Tunis or Istanbul," Khatib said via his Facebook page, citing as another condition that passports for exiled citizens be renewed.

"I became aware thanks to the media that the regime in Syria has called on the opposition to enter into dialogue," said Khatib, who heads the main opposition Syrian National Coalition.

"While it is not right for anyone to bargain with the freedom for which our people have paid so dearly in blood, I say there are basic conditions before I sit down with representatives of the regime," he said.

Khatib described his proposal as "a goodwill initiative to seek a political solution to the crisis, to prepare for a transitional phase that prevents any more bloodshed."

But he added that "we cannot trust a regime that kills children, attacks bakeries bombards universities, destroys Syria's infrastructure and massacres innocent people."

Assad proposed earlier this month a national dialogue to end Syria's crisis, but he made it clear this would only apply to groups not linked to the armed insurgency, effectively shutting out the National Coalition.

Khatib said the unprecedented statement expressed his own opinion only and that his group would meet on Thursday to discuss the proposal.

An influential opposition group, the Syrian National Council (SNC) -- a key component of the Coalition -- swiftly rejected the proposal.

"The Syrian people have -- and are still paying -- an extremely high price for their full freedom and to get rid of every last remnant of this oppressive, tyrannical regime," said the SNC, adding that it "rejects any settlement or negotiation with the Syrian regime."

The Coalition had earlier Wednesday lashed out at the "global inaction" which it said was giving Assad's regime a license to kill, accusing Assad's forces of being behind the killings of at least 78 people whose bodies were Tuesday in a river in northern Syria's Aleppo.

The United Nations says more than 60,000 people have been killed in Syria's 22-month conflict.

Some sanity? Hope it's true. No human deserves such sufferings and horrors, be in Syria, Afghanistan, Gaza, Sudan, Yemen or the 9/11 attacks.

"it's about time! the syrian regime has been saying they are willing to talk for almost two years now." Again the usual diarrhea spewing out of your posts you FARSI! The Syrian regime "willing to talk"....? Who are you kidding you chump? You obviously are clueless about the Assad family (regime) history and their known treacherous schemes. You can take a Hyena out of the jungle but can't take the jungle out of a Hyena! Mustool!

I guess bigsami has never lived or tasted the attrocities of war.
I don't condone none of them, and as a Syrian citizen I'm discussed with the verocity and hatred on both sides of pummeling each other to nothing, destroying beautiful historical places Mosques, churches, for what , to satisfy the egos af Assad, KIng of S. Arabia or shiekh of Qatar
where is the Nationalism of the Syrian population

This a good move; lets see if Syrian officials will not impose harsh preconditions...

I think he agrees to talk because otherwise al nusra extrimist islamists would become too strong. Very wise move from a wise person.

So much energy in your words, I like it ;)

Isn't he suppose to be a Sheikh-- how did he become a political leader, oh, I forgot, it's the era of political Islam and Syria's opposition consist of an Islamist majority.

Bashar is over... Russia let him down during Lavrov's speech. Plus, the revolucionaries don't want an international intervention, they just want weapons to cripple his rotten regime with bullets. I hope Bashar's wife and kids also live what those innocent civilians kids lived. I mean torture to death... which is far worse than AbuGhraib or Kandahar.

Don't you ask me how come I know? jajajaja

for sure. He's got identity problems... I feel pitty for such people, not hatred.

It is true that FSA or the opposition( because we dont really know anymore which groups are fighting ) , if they want to hold talks with Assad is because they havent been able to advance a lot againt him. He is still supported by Russia and China and has unlimited acess to weaponry of high calibre. As many as the oppostion can have of men fighting, they dont have the weapons capable to win a war. And the fighters are showing extremism and other groups are forming which is bringing the situation to a point of no return. The Leaders of FSA realised that now and they are weakened.

In my opinion , The demands of the FSA:
- Assad must hold elections with UN as monitors
- Assad must leave anyway at the end of his mandate

In return Assad will ask :
- FSA must show him the hideabouts of extremist groups such as al nusri dunno what.
- That whatever the outcome of the elections to be held are, he will stay till the end of his mandate as the sole honorable exit for him
- His party stays and can be still elected in polls

All those who are supporting Assad now will pay sooner or later as the innocent blood spilled will not go unpunished and we have long memories.

Long memories, siiiii! not just it, books but also internet and youtube to remind ourselves what Hizbo-woof-woof did to innocent syrian civlians.

Has anybody heard of gabby456 today? Every day that goes by proves, as gabbaguybo has been predicting since he began breast-feeding, that the ASSad regime is still continuing to be about to collapse, and now even more so that the opposition decided to talk with the "collapsing" ASSad regime. What a great heart this humane opposition has, especially the Libians, Algerians and Afghanis among them! My friends, my compatriots of March 14 and Lebanon First Into the Abyss, your calculations (aka your hopeless hopes) that the ASSad regime is on its way out are also apparently on their... umm... duh... well... way out as well? Keep your hopes alive, warriors. God bless Lebanon first (lower-case f) and foremost.

The Assad regime has committed sufficient crimes against Lebanon for decades and now against the Syrian people, they must go. The rebels came about seeking justice and freedom, hopefully they will not lose their noble cause and sink into the quick sand of hatred, revenge and autocracy themselves. When someone agrees to negotiate it should not be interpreted as weakness, likewise if they refuse it should not mean strength. What people of the Middle East need most is justice, liberty, prosperity and opportunity. Ongoing revenges will lead only to more misery and fanaticism. The rule of eye for an eye and tooth for a tooth will render our region blind and toothless. Enough bigotry and backwardness we need kind and forward vision.

What we need is people who speak the truth no matter which side of politics they support and not be afraid of it.