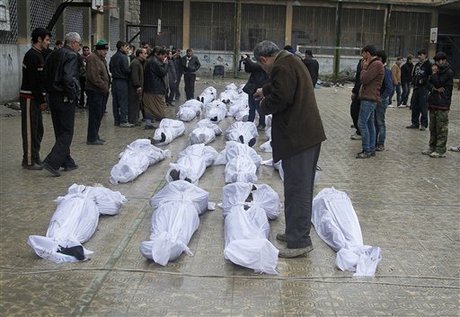 Umm Mohammed walks slowly among the 32 shrouded corpses lying on the floor of a school in Syria's Aleppo city, some of scores shot at point-blank range who were being buried on Wednesday.

She stops and kneels down to draw aside the sheet covering a face too damaged to recognize. One of the fighters pulls the sheet further away to reveal a tattoo on the dead man's right arm.

Umm Mohammed covers her face with her hands and weeps.

"It's her nephew, a doctor from the city of Maara who disappeared in July," says her husband, Abu Mohammed, who was on the banks of Aleppo's Quweiq River on Tuesday.

There he had helped to drag from the water the bodies of what some say may have been more than 80 victims, mostly young men but also some women and even children.

"When we got him on shore, I was sure it was him. The worst thing will be to tell his mother about it; she had been holding out hope that he was still alive," says Abu Mohammed.

No one has claimed responsibility for the gruesome massacre. Rebels fighting to overthrow President Bashar Assad blame his regime, and it in turn points the finger at the Islamist al-Nusra Front.

But at this school, in a rebel-held zone of Syria's once thriving commercial capital, there is no doubt that Assad was behind the massacre.

"We will avenge what happened yesterday. The deaths of these innocents will not go unpunished," rebel commander Abdel Khader al-Sada tells Agence France Presse.

Hundreds of youths gather outside the Yarmuk School as preparations get under way to bury the victims. They chant: "We will not forget the blood of our martyrs!"

Several men carry a body out of the school, wrapped in a sheet and the Syrian revolutionary flag to shouts of "Allahu Akbar" (God is greatest), which are drowned out by bursts of gunfire from fighters' Kalashnikovs.

Just after midday, an imam raises the palms of his hands to his face and begins to pray over the bodies, as a hush falls over the kneeling crowd.

Then his prayers are interrupted by more shouts of "Allahu Akbar!"

Rebel Captain Abu Seij, in charge of the improvised morgue at the school, says the toll has gone up after one rebel fighter had on Tuesday said 78 bodies were retrieved from the river and that more were still in the water but out of reach because of regime snipers.

"We managed to get one more body out last night, and today have verified that there are at least two women and a number of children floating in the water," says Abu Seij.

So far, at least 46 of the bodies have been identified and relatives have already taken some away for burial at home, he says.

"If they are not identified, the rest will be taken to the cemetery outside Aleppo and buried in a common grave."

Meanwhile, activist Mohammed al-Madi photographs each body as it lies decomposing on the school floor.

"We will create a database on each of the faces so that families might eventually identify their loved ones and know where they have been buried," he says, explaining that each body will be given a number that corresponds to its grave.

Amid the grim task of burying the dead, rebel commander Sada spits invective at the United Nations and Western powers for having done nothing to end a conflict that has claimed more than 60,000 lives in 22 months.

"The United Nations and the West, from this moment, are responsible for the death of each and every man, woman and child in Syria. There can be no talk about negotiating with someone who massacres his people," he says.

"Assad has shown that he does not want to negotiate because he lives under the umbrella of impunity that the West gives him."

The States of Lebanon, Jordan, Iraq, Turkey should join the rebellion in their fight for cleaning out Syria from these EXTREMELY dangerous people. They're an international threat, these syrian shabiha brigades and mercenaries can cross the borders anytime and kill us.

The same exact thing can be said about both sides. I think turkey n co. can manage without lebanons help...