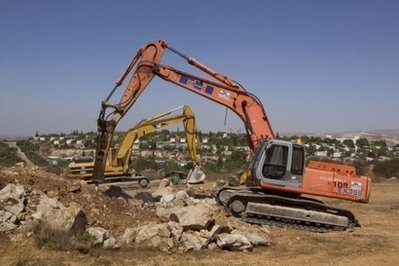 Jewish Israelis are divided on the question of removing some settlements as part of a peace deal with the Palestinians, with 50 percent in favor and 43 percent opposed, a poll said on Thursday.

The survey, which was conducted by Tel Aviv University and the Israel Democracy Institute, found that just 28 percent of Jewish Israelis thought the government would need to remove all settlements, including major blocs.

Israel's Arab citizens, who make up 20 percent of the population, are strongly in favor of the full removal of settlements, according to the poll which was published in the Yediot Aharonot newspaper.

Three quarters -- 74 percent -- of Israeli Jews support Prime Minister Benjamin Netanyahu's demand that the Palestinians recognize Israel as the "Jewish state" in exchange for renewed restrictions on settlement construction, while 79 percent of Arabs were opposed.

The Palestinians recognized Israel in 1993 but have refused to recognize its "Jewish identity", fearing that doing so would compromise the right of return of Palestinian refugees from the 1948 Arab-Israeli war.

Arab citizens of Israel also oppose such recognition along with the related demand that new citizens swear an oath of loyalty to Israel as a "Jewish and democratic state," saying it amounts to discrimination.

The survey also found that 72 percent of Israeli Jews support U.S.-backed peace negotiations with the Palestinians but only 35 percent believe they will lead anywhere, a degree of pessimism reflected in other recent polls.

The pollsters surveyed 600 people they said were representative of the adult population of Israel and gave a margin of error of 4.5 percent.

The United States managed to relaunch direct peace talks in early September after months of intense diplomatic efforts, but they ground to a halt later that month when an Israeli settlement-building moratorium expired.

The Palestinians have refused to return to the talks without a complete freeze on settlement construction and the Arab League has given the United States until early November to find a way out of the impasse.(AFP)