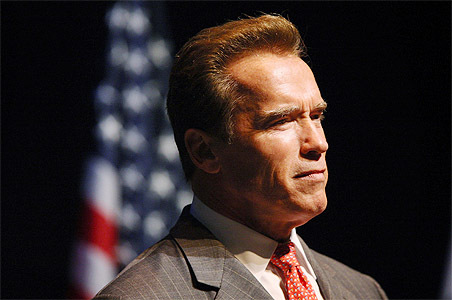 Arnold Schwarzenegger called Thursday for an end to "doom and gloom" environmentalism as he hosted the first conference of his new green movement fostering action by local governments and individuals.

"If we want to inspire the world, it is time for us to forget about the old way of talking about climate change, where we crush people, where we overwhelm people with data," the former California governor, bodybuilder and film star said.

"There is a new way, a more sexy, a more hip way. Instead of using doom and gloom and telling people what they can't do, we should make them part of our movement and tell them what they can do," he said.

"I mean I still drive my Hummers but now they are all on hydrogen and biofuel ... We need to send a message that we can live the same life, just with cleaner technology."

Following his success implementing environmental legislation in California ahead of federal U.S. action, Schwarzenegger's created the R20 Regions of Climate Action movement in 2010.

It is aimed at getting other regions, states and cities to follow the Golden State's example in the absence of effective national and international agreements on reducing carbon emissions widely blamed for the Earth's climate becoming more volatile in recent decades.

"The old way was to wait for the capitals, or an international agreement to create a sustainable energy future, is over," Schwarzenegger, 65, told the conference of around 800 people in his native Austria.

"We believe in a new way, in moving forward at a subnational level. We can't be paralyzed, waiting for an international agreement or federal action or anything else," Schwarzenegger said.

"I believe we should move forward at a subnational level, in the states, in the provinces, in the cities, in the private sector, in the academic sector and in the non-profits. These should be defined by our momentum, not our hesitation."

Attendees in Vienna included Jose Manuel Barroso, European Commission president, but absent were green pressure groups such as Greenpeace or WWF, who complained last week that the event risked being "elitist" and "Greenwashing".