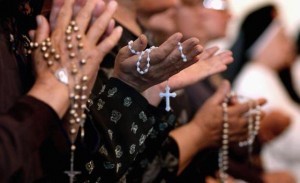 Bishops from the Iraq-based Chaldean Church elected the archbishop of Kirkuk as their new patriarch on Friday at a synod held in Rome instead of Baghdad for security reasons, church websites said.

Louis Sako will replace Emmanuel III Delly who retired in December after reaching the age limit of 85 in the Christian church which recognises the authority of the pope.

Sako was elected by 15 bishops from Iraq and other parts of the Middle East, as well as areas of North America and Europe with large Iraqi diasporas.

The election was announced by Iraqi Christian websites and the synod was presided by Cardinal Leonardo Sandri, prefect of the Vatican's Congregation for the Oriental Churches.

The Chaldean church, which has 700,000 followers and uses Aramaic -- the language that Jesus Christ would have spoken -- has struggled in the past decade of unrest and rising Islamic militancy in Iraq.

Sako will take on the official title of "patriarch of Babylon of the Chaldeans". He is seen as pro-Kurdish and has favored co-operation with Muslim leaders in his archdiocese.

We're screwed. Long live an united Assyrian nation, and no bishop will stand in the way for this.