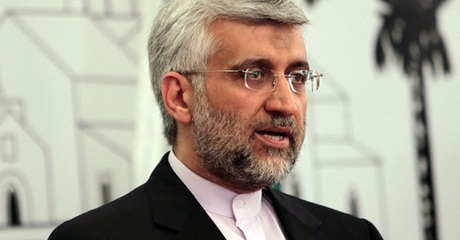 "We will give all our support so that Syria remains firm and able to face all the arrogant (Western) conspiracies," said Saeed Jalili, who heads the Supreme National Security Council.

"The Israeli aggression and arrogant international forces have tried to take revenge by attacking the resisting Syrian people," said Jalili, who said Israel and the West had turned "desperate."

Jalili was referring to an alleged Israeli air strike on Wednesday that a U.S. official said hit a military complex and missiles near the Syrian capital.

The Syrian army said the raid, which the Jewish state has not confirmed or denied, targeted a military research center located between Damascus and the Lebanese border.

On Thursday, Iranian Deputy Foreign Minister Hossein Amir Abdollahian warned that the attack would "have grave consequences," without elaborating.

Israel fears Syrian weapons could be sent to Hizbullah, a close ally of Damascus and Tehran.

Jalili said "the Arab and Muslim worlds must do all they can to diminish the Syrian people's suffering because Syria is at the forefront of the struggle against Zionist aggression."

In a separate statement carried by state news agency SANA, he criticized "Syria's enemies who aim to undermine the resistance...by attacking Syria's infrastructure and by pursuing their economic sanctions."

"The Muslim world will not allow an attack against Syria," Jalili warned.

Iran has backed Assad's accusation that the 22-month uprising against his regime is politically, financially and militarily backed by the United States, Turkey, Saudi Arabia and Qatar.

Washington, in turn, has accused Iran of stepping up military aid to Syria.

if you listen to those fools it s like the syrian regime is fighting against evil foreigners! whereas syrian people are fighting for their freedom and democracy (quoting hamas the iranian sponsored militia!)...

"because Syria is at the forefront of the struggle against Zionist aggression."
another magnificent stupidity... when did syria fight against israel? when did they shoot a bullet to free the golan heights???? lol!!!

Do you people in Iran really believe this blatant ever ongoing propaganda your countries spews nonstop? I mean you understand your state sponsored TV, your fake youtube Channel. Do you understand RT TV is fake.

is what you would say when you look into a mirror...