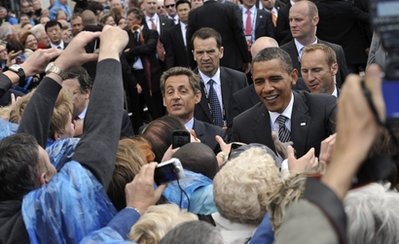 Reinforced sanctions against Bashar al-Assad's regime in Syria will be on the agenda of the G8 summit of the world's most powerful leaders Thursday, French President Nicolas Sarkozy said.

"Clearly, the question of strengthening sanctions against Syrian leaders needs to be asked. There will be discussions about this tonight," Sarkozy told reporters at the meeting in the French resort of Deauville.

"There will be discussions about this tonight," he said, before heading to a local restaurant to host a working dinner with the leaders of Britain, Canada, Germany, Italy, Japan, Russia and the United States.

G8 chiefs met to call for an end to the violent repression of revolts in Syria and Libya and express solidarity with their partner Japan as it recovers from its nuclear disaster.

According to a draft version of their planned declaration, the leaders of the world's richest nations were also to urge immediate Israel-Palestinian peace talks and back a government role in policing the Internet.

A massive security operation involving 12,500 police and gendarmes, backed by boats and spotter helicopters, smothered the chic resort of Deauville on the northern French coast as the leaders arrived at the seafront venue.

The declaration was discussed over lunch and at an afternoon round-table session hosted by Sarkozy for the leaders of Britain, Canada, Germany, Italy, Japan, Russia and the United States.

Addressing Assad's regime, the leaders urged Damascus to end violent repression and carry out reform, as they sought ways to encourage democracy in their first meeting since the "Arab Spring" uprisings.

"We call on the Syrian leadership to stop using force and intimidation against the Syrian people and to engage in dialogue and fundamental reforms in response to the legitimate expression of the demands of the Syrian people," the draft, obtained by Agence France Presse, said.

G8 member Russia had previously spoken out firmly against foreign intervention in its traditional Middle East ally, and earlier this month rejected calls for a special U.N. Security Council meeting on the country.

Kan said the summit would take place in Japan, where he said the nuclear situation was "gradually stabilizing," according to a Japanese official.

"Businesses and tourism are working as usual. Excluding the area surrounding the nuclear plant, radiation levels, including in Tokyo, are dropping and they are absolutely unharmful to humans," he added.

Nuclear safety is high on the summit agenda following the March earthquake in Japan, which triggered a tsunami killed 25,000 people and flooded the Fukushima Daiichi nuclear plant.

G8 leaders would express "heartfelt sympathy" to the people of Japan during the lunch, said the draft

Amid a slew of bilateral discussions, Russia and France finalized an unprecedented deal for Paris to sell four powerful modern warships to Moscow, in a move that may worry some European and post-Soviet nations.

Sarkozy and his Russian guest Dmitry Medvedev said the protracted talks would soon result in a firm contract.

"All talks have been completed. The contract will be signed shortly," Medvedev said. Sarkozy said the signature would take place in a fortnight.

Sarkozy took time out to hail the arrest of former Bosnian Serb military chief Ratko Mladic as "a step towards Serbia joining the European Union" after a 16-year manhunt for the world's most wanted warcrimes accused.

At what will effectively be a 24-hour meeting, leaders were also expected to urge Israel and the Palestinians to grab the opportunity provided by the Arab uprisings to begin substantive peace talks "without delay", the document said.

France hosted a so-called "e-G8" on Tuesday and Wednesday in Paris, a gathering of the biggest names in the online industry to discuss ways of regulating the Internet without killing its economic potential.

And the proposed final statement for the two-day meeting says the private sector must remain the driving force behind the online economy and emphasizes the need for openness, transparency and free expression.

Some G8 countries such as the United States are wary of international regulation of such a vibrant sector, and many web-users attacked Sarkozy's initiative, suspecting a covert bid to censor or control the freewheeling web.

Sarkozy's supermodel-turned-chanteuse wife Carla Bruni-Sarkozy ended weeks of speculation about France's soon-to-be First Baby when she greeted the wives of the G8 leaders with a visible bump swelling an unbelted white dress.

Bruni, 43, had declined to comment on pregnancy rumors through weeks of speculation but made no attempt to hide her condition and the news eclipsed the disappointment of the absence of Michelle Obama and Samantha Cameron.

Deauville's elegant seafront boardwalk was empty apart from scattered knots of police, and a chill wind blew in off the English Channel as local people huddled under hoods and umbrellas to watch the dignitaries arrive.