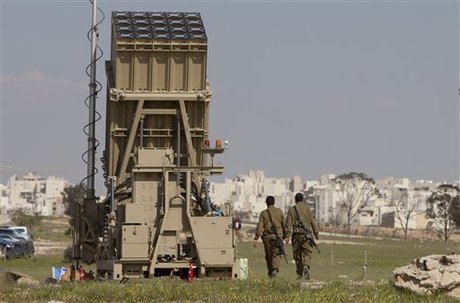 Israel has deployed a third Iron Dome missile defense battery to the north of the country a few days after carrying out an air strike inside neighboring Syria, Israeli media said on Tuesday.

"The deployment of several Iron Dome batteries in the north of the country comes as part of the setting up of the system," an army spokesman was quoted as saying.

The third Iron Dome battery's dispatch comes after Defense Minister Ehud Barak implied Israel was responsible for a January 30 air strike inside Syria that was immediately attributed to the Jewish state.

The strike targeted a military complex near Damascus that a U.S. official later said contained surface-to-air missiles, and an adjacent facility said to house chemical weapons.

Israeli media last month reported the deployment of two Iron Dome batteries to the country's north as a precaution against potential attacks from Syria or Lebanon.

The Jewish state fears the possibility of chemical weapons falling into the hands of Islamist militants should Syrian President Bashar Assad fall, as Damascus continues to fight a two-year uprising that has turned into a bloody civil war.

The Iron Dome batteries -- which can shoot down missile attacks with a range of up to 70 kilometers (44 miles) -- would allow Israel to launch a quick strike on targets in its two northern neighbors, a security source told Agence France Presse.

The much vaunted anti-missile system played a prominent role in an eight-day confrontation between the Jewish state and Gaza-based militants that ended with a November 21 ceasefire deal.