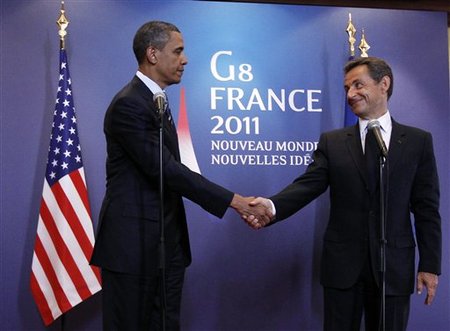 The United States and France are united in their resolve to finish the job in Libya, U.S. President Barack Obama said after talks with President Nicolas Sarkozy at the G8 summit Friday.

Obama and the French leader said they have a convergence of views of a series of key issues during their talks, which lasted around 45 minutes, just before the wider summit considered the implications of the Arab Spring.

"We agreed that we have made progress on our Libya campaign," Obama said.

But the U.S. leader warned that the "U.N. mandate of civilian protection cannot be accomplished when Gadhafi remains in Libya directing his forces in acts of aggression against the Libyan people."

"We are joined in resolve to finish the job."

The United States provided the bulk of the firepower blitz which launched the NATO campaign in Libya, but has since taken on a support role with European nations, especially France and Britain to the fore.

After a week of acrimony in his Middle East peace drive, Obama also said that the turmoil spawned by the Arab Spring made the pursuit of peace between the Israelis and Palestinians "more urgent, not less."

And he said France and the United States would coordinate closely to encourage the parties to sit down around a negotiating table on the work of framing a secure Israel and viable Palestinian state.

Sarkozy thanked Obama for helping the smooth running of the summit, in the French resort of Deauville and said they had reached the "same analysis" on Libya.

In his appearance with Obama, Sarkozy also noted that he and Obama were standing on Normandy soil, not far from the beaches where U.S. and allied soldiers mounted the invasion of Nazi-occupied Europe in 1944.

"For all of us French men and women and in particular the people of Normandy, when the President of the United States is standing on this ground it is particularly significant," Sarkozy said.

"There are many young Americans who gave their lives for us, who rest on Normandy soil."