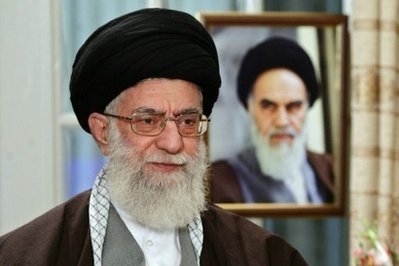 "You (Americans) want to negotiate when you are pointing the gun at Iran. The Iranian nation will not be intimidated by such actions," Khamenei told air force commanders, according to excerpts of his speech posted on his website.

The all-powerful Khamenei has final say on all key issues in the Islamic republic, including Iran's sensitive nuclear activities and foreign policy.

"I am not a diplomat but a revolutionary," he said. "The U.S. policies in the Middle East have failed and the Americans are in need of a winning hand. That is bringing Iran to the negotiating table."

He made the remarks in response to an offer put forward by U.S. Vice President Joe Biden to engage Iran directly to resolve the nuclear issue provided "the Iranian leadership, supreme leader, is serious."

Speaking at the Munich Security Conference last week, Biden said: "We have made it clear at the outset that... we would be prepared to meet bilaterally with the Iranian leadership.

"That offer stands, but it must be real and tangible, and there has to be an agenda that they're prepared to speak to. We are not just prepared to do it for the exercise," Biden said.

Khamenei's remarks came a day after the U.S. tightened sanctions on Iran to further choke off its oil income.

The two foes are locked in a tense showdown over Tehran's nuclear ambitions, which the West and Israel suspect are aimed at military objectives, despite Iran's denial.

Washington broke off relations with Iran in 1980 in the aftermath of the storming of the U.S. embassy in Tehran, which led to 52 American diplomats being taken hostage by Islamist students.

Since then, the U.S. has been vilified by the Islamic republic as the "Great Satan".

Smart move by the Ayatollah but not because of the sanctions however. The Iranians need the Russians and the French at the table to corroborate the dialog during the talks.

Sitting down alone with the US means there are no witnesses to the meetings. Even if Iran agreed to US demands the US could ask for more to scuttle the talks ... Iran needs witnesses in the room.

Exactly correct my friend. The US global hegemony will not be denied. Most countries feel as you and I do but they can not afford to try to help Iran when Iran makes nothing but boasts about its' ability to retaliate.

Iran has played right into the hands of the US. Iran has not bothered to garner any real allies. Russia and China will block for Iran but they will not help Iran to any great extent.

So Iran tries to go it alone against the US, Israel, the EU and the GCC. Good luck with that. Whether it was Ahmadinejad or the Ayatollah Iran has played itself right into a corner.

Iran had better sign a nuclear agreement and quickly. Ahmadinejad mouthing off in Egypt about destroying Israel is yet another foolish outburst and an insult to the hospitality of Egypt itself.

Mckinl- If that was all it takes, don't you think he would have stated that he is willing to talk as long as france and russia are on the table?
I do however agree with you on the below statement that Iran backed itself into a corner. I just don't see why they need to have a nuke. Open up to the IAEA and show you have not intentions of building a nuke and you could easily work on your peaceful nuclear program. They could easily work with other countries to build nuclear powerplants like the ones russia installed for them. I just don't see why you would put your people through all of that when you can avoid it.

They need a nuke cause America will not attack a country with a nuke. The aim has been regime change in Iran since 79'. The only way to guard against thak is a nuke.

Israel security is a major US concern.
first the Israelis will eliminate the hizbushaitan threat close to home, then it will be the turn of iran.
the sooner, the better.

hello stupid guy, we missed you so far :)

good move from iran...dealing with the americans is like dealing between the israelis and the palestinians=settlements and waisting time...

With the sanctions, all I see is the US placing a block and hold on Iran's oil until the rest of the world's supply is low. Then attack Iran, claim the oil and make a bajillion dollars.

Great movie. Bothe what about bob and the story you just layed out!

Tony accusing FT and the rest of the world being uneducated. Think not thing, off the map not of the map, barking not barging, turban not turbine. Most people here made good comments without any hate or anger. But you need to tone it down and stop barging as you said.

it is good you say "most", because there is rarely a comment from FT that does not insult someone :)

Picture of the two devils, one of the was a pedophile

A raven is a better avatar for you hate4lebanon.

Send the ravens! (game of thrones)