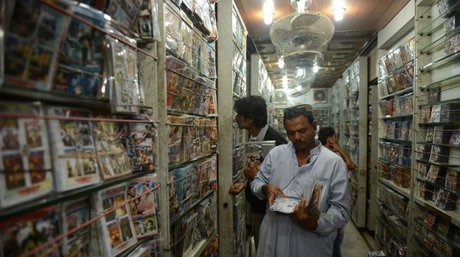 The Pakistani Taliban have warned shopkeepers in a popular market to stop selling "obscene films" and Viagra-style male potency pills.

Shopkeepers told Agence France Presse Monday that they found handwritten pamphlets containing the warnings after opening Saturday in Karkhano market on the edge of the northwestern city of Peshawar.

"Selling sex drugs, vulgar films and obscene movies are against Sharia," said copies of the pamphlet distributed in the name of Tehreek-e-Taliban Khyber.

"All those involved in this business are warned to quit this occupation and start a lawful business or face the consequences," it said.

Those who received the threatening letter spoke to AFP on condition of anonymity because of fear of Taliban reprisals.

Dozens of shops in Karkhano openly sell pornographic films and male potency tablets, according to witnesses.

The market borders the tribal district of Khyber, where fighting has recently intensified in a long-running Pakistan military operation against the Taliban and other Islamist militias on the Afghan border.

Shopkeepers selling music and films are routinely threatened across the northwest, where hundreds of DVD and CD shops have been bombed in the past by militants who deem their business un-Islamic.

At least 10 people were killed and 26 wounded Friday when a bomb exploded near a DVD shop in Kalaya, the main town of Orakzai tribal district.