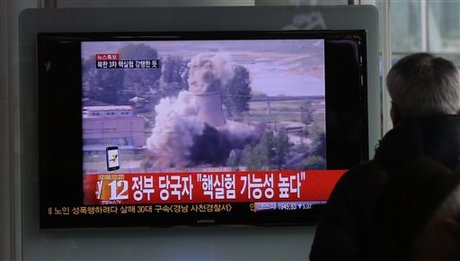 North Korea said its nuclear test Tuesday was only a "first" step and warned of stronger action if it was faced with tougher sanctions as a result.

"The latest nuclear test was only the first action, with which we exercised as much self-restraint as possible," the foreign ministry said in a statement carried by the country's official news agency.

"If the U.S. further complicates the situation with continued hostility, we will be left with no choice but to take even stronger second or third rounds of action," it said without elaborating.

The statement came just hours after South Korea's spy agency chief warned Pyongyang might carry out another nuclear test or ballistic missile launch in the coming days or weeks.

North Korea said Tuesday's test was directly targeted at the United States. It accuses Washington of inciting global condemnation of its nuclear program and of leading the sanctions charge in the U.N. Security Council.

Its claim of miniaturization suggests that it is a step closer to fitting a nuclear warhead onto a ballistic missile.

The confirmation from North Korean news agency KCNA came nearly three hours after seismic monitors detected an unusual tremor at 02:57 GMT in the area of the country's Punggye-ri nuclear test site, close to the Chinese border.

Analysts said the timing appeared to be an attention-grabbing calculation from a state well versed in provocative acts, coming just ahead of U.S. President Barack Obama's State of the Union address at the start of his second term.

North Korea's two previous tests in 2006 and 2009 triggered waves of U.N. sanctions, and the Security Council was set to meet in emergency session on Tuesday morning in New York in response to the third detonation.

In a series of stances, World powers condemned the NKorean third nuclear test in defiance of stark international warnings.

On a technical level, along with the miniaturization aspect, experts are hungry to know if North Korea used up more of its scarce reserves of plutonium, or exploited uranium in a new and self-sustaining path to atomic detonations.

The test came after North Korea earlier Tuesday had called for "high-intensity" action and further long-range rocket launches, after incurring U.N. wrath for firing a ballistic rocket in December.

He said it was unclear yet whether uranium was used.

The explosive yield compared with 15 kilotons in the world's first atomic bomb dropped by the United States on the Japanese city of Hiroshima in 1945.

North Korea's first test yielded less than one kiloton and was widely seen as a dud. The second test yielded between two and six kilotons, according to Seoul.

The third test throws down a stark security and diplomatic challenge to Obama as well as to new Chinese leader Xi Jinping.

Masao Okonogi, an expert on North Korea and professor emeritus at Keio University in Japan, noted the timing ahead of the State of the Union and said North Korea under Kim Jong-Un was sticking to its past tactics.

"Their tactic is to produce a crisis and press the international community to negotiate with them," he told Agence France Presse.

"North Korea will not stop just with this nuclear test but continue dragging out this nuclear crisis towards July, when Washington will celebrate the 60th anniversary of the ceasefire in the Korean War.

"North Korea's strategy is to upgrade the ceasefire to a peace treaty. Pyongyang will soon start a campaign, in which it will try to normalize ties with the United States."

Pyongyang's promise of a "higher-level" test had fueled speculation it would be of a uranium device.

A uranium test would confirm suspicions that the North has been secretly enriching weapons-grade uranium for years and open a path for Pyongyang to significantly expand its small nuclear arsenal.

There will be particular concern at any sign that the North has made progress in the technically complex process of "miniaturizing" a bomb to fit on the head of a long-range missile.

Proven miniaturization ability would take on added significance in the wake of December's rocket launch, which marked a major step forward in ballistic prowess, and provoked still-tighter U.N. sanctions.

At the U.N. Security Council, the United States and its allies will push hard for China to get tough with its erratic ally.

But China's leverage is limited, analysts say, by its fear of a North Korean collapse and the prospect of a reunified, U.S.-allied Korea directly on its border.