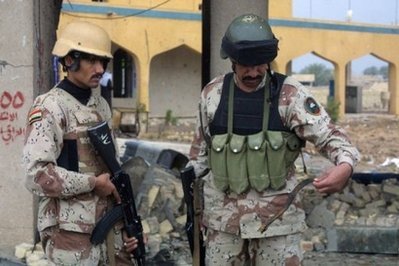 Back-to-back suicide bombings in northern Iraq killed the head of the country's intelligence academy and two of his guards on Saturday, officials said, in the latest in a surge in nationwide violence.

The blasts, the deadliest in a series of bombings that left five people dead across Iraq, come as the country grapples with nearly two months of anti-government protests and a political crisis.

The first bomber blew himself up in front of Brigadier General Aouni Ali's home in Tal Afar, north of Baghdad, killing two of his guards including his brother Murad and wounding four others.

A second attacker killed the general himself, according to a colonel in the town's police force.

His house in his hometown of Tal Afar had minimal security, with a small guard shack at the gate, the colonel said.

Though lower-ranking officers and enlisted personnel are typically the victims of attacks on Iraqi security forces, senior officers including generals have also been targeted and killed.

No group claimed responsibility for the violence.

But Sunni militants linked to al-Qaida often target security forces and government officials in a bid to erode confidence in the government and push Iraq back towards bloody the sectarian conflict of 2006-2007.

Also north of the capital on Saturday, a judge was killed by a magnetic "sticky bomb" attached to his car in the village of Sulaiman Pak, according to security and medical officials.

Ahmed al-Bayati, a Sunni Arab who is now a judge handling civil cases, had previously received threats when he worked as an anti-terror investigator, and had to pay kidnappers a $150,000 ransom after his son was snatched last year.

Elsewhere, a roadside bomb killed an army lieutenant and wounded two soldiers in Heet, northwest of the capital.

Iraq has seen a rise in attacks in recent weeks. The latest violence brings the number of people killed in the country this month to 135, according to an Agence France Presse tally based on security and medical sources.

However, levels of violence remain markedly lower than during the peak of the sectarian war in 2006 and 2007.