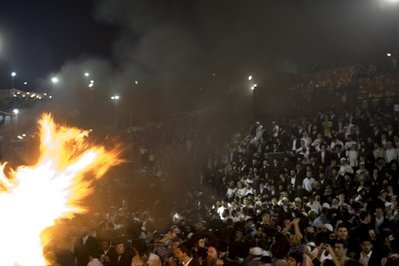 Israeli soldiers clashed overnight with Jewish worshipers who tried to enter a religious site in the northern West Bank city of Nablus without permission, the military said on Monday.

The disturbances erupted when scores of religious Jews attempted to visit Joseph's Tomb without authorization shortly after hundreds of others had traveled there on an army-escorted tour.

"The army authorized 1,600 Israelis to go to pray at the tomb and this visit was carried out without any problems. But 200 other Israelis infiltrated Nablus without permission and 50 of them entered the tomb," a spokeswoman told Agence France Presse.

"Clashes broke out when the soldiers tried to evacuate them by force. The army also received complaints from Palestinians, who said some of the worshippers damaged their property," the military spokeswoman added.

She said the complaints would be investigated.

Public radio said Israeli border guards arrested three of the infiltrators, one of them a minor.

Israelis are only allowed to visit Joseph's Tomb with permission from the military on organized, escorted tours coordinated in advance with Palestinian security forces.

But religious Jews frequently seek to sneak into the site, which many believe to be the final resting place of the biblical Joseph.

On April 24th, one Israeli was killed and four injured when Palestinian police opened fire on a group of Jews who had entered the tomb without permission.

An Israeli military investigation into the shooting published on Sunday found it was not premeditated, but that the group of Israelis did not pose a significant enough threat to justify the Palestinian decision to open fire.