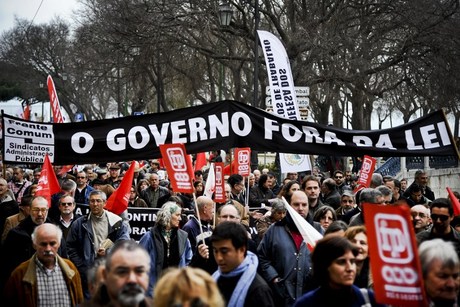 Thousands of protesters rallied in Portugal on Saturday against austerity measures imposed on the country by its international creditors.

Answering a call from the CGTP, Portugal's leading union, some 5,000 protesters marched in Lisbon and organizers said tens of thousands rallied in about 20 cities across the country.

"We want to break with the commitments made in return for the rescue plan, break with right-wing policies, demand the resignation of the government and new elections," union chief Armenio Carlos said.

Crushed by a soaring public debt load, Portugal has implemented tough austerity measures in return for rescue loans from the European Union and International Monetary Fund.

Under the weight of cutbacks in public spending, the unemployment rate rose sharply in the fourth quarter of last year to 16.9 percent while the economy contracted by 3.2 percent in 2012.

"We can feel the lack of money every day, the cost of transportation has gone up, along with school fees. This policy has no future, it is destroying the country's economy," said protester Maria Manuel Reis, a 55-year-old civil servant.