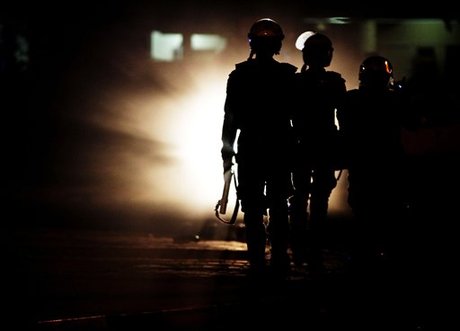 A statement Sunday on the ministry's website said the suspected terror network received training and financial support from Iran, Iraq and Lebanon — references to Iranian-backed Shiite groups such as Hizbullah and others.

"Details about the case will be announced as soon as the investigation is completed," he said.

Sheikh Rashid also denounced the "escalation in violence" in the kingdom where a protester and a policeman were killed during Shiite-led protests to mark the second anniversary of the 2011 uprising there on Thursday.

He said "terrorist acts had taken place over the past three days" in which "two people were killed and 75 policemen were wounded," adding that "there has been an escalation... with the use of firearms" and explosives.

Bahrain courts have previously convicted suspects for alleged coup plotting and links to Iran and Hizbullah, but no clear evidence has been made public.

Bahrain is home to the U.S. Navy's 5th Fleet.

"The death toll from a devastating bomb attack on Shiite Muslims in southwest Pakistan rose to 81 Sunday ... "
http://www.naharnet.com/stories/en/72267-pakistani-city-in-mourning-after-bomb-blast-kills-81

"The report said that the Western states are pressurizing Qatari, Turkish and Saudi officials not to embark on such an irresponsible and crazy act ..."

" ... several regional states, including Qatar, have paid $100 to each participant in protest rallies in al-Anbar province ..."

The Fatwah on the Shia is being planned and financed by the Saudi-Qatar-GCC and they are active in every country in MENA including Lebanon ... Bombings, false flag operations, assassinations, propaganda, innuendo, half truths and lies ...

That could be right. But it does not mean that HA should embark on a Shiite crusade in the GCC. This could only have negative fall out socially and economically on Lebanon.

Did you miss this line?

"Bahrain courts have previously convicted suspects for alleged coup plotting and links to Iran and Hizbullah, but no clear evidence has been made public."

Bahrain is obviously in coverup mode. They have been guilty of brutality and torture and the way the cards are falling they will have to resort to "collective punishment" to contain what is a Shiite majority in the country.

Your comment is just more proof that you can't be taken seriously ...

Search whereever u like after Norways "Austin Radio" and u will discover how credible that story is. I have liver a fair number of years in Norway and know the media picture there to the smallest detail. Never heard of Radio Austin though...lol..

Who is funding Al Qaeda in Iraq ???

shia in GCC have more rights than sunni in Iran, some of them are following Iran instructions , but they will regret it.

to those aboce cruing because of anti shia sentiments all around the sunni world (actually it is now all around the wolrd):
- if iran and hizbushaitan did not engage in terrorist acts like they are doing in several countries, no one would have had such sentiments.
iran and hizbushaitan acts have clearly drawn hatred towards shia and the shia community has not done anything to dissociate themselves from them, instead they are supporting them, thus they are increasing hatred towards the whole community.
so stop blaming others for your deeds.

the difference is that sunnis condemn extremists among them while shia embrace and support these terrorists.

The Sunnis bombed the towers geha not shiites. So you whole list is null and void.

It doesn't matter if they were Sunni, Shia, or Christians. They are ARABS. They all fit in the same bag.

Yes saad, thats what I was saying, to the western world, we're all Arabs, they don't care about our sects.

No JC, it does not void that list. revert to my above comment:
shia support terrorists among them while sunnis condemn them.
and that is a major difference.

funny those defending extremists shia while slamming extremists sunnis...or vice versa...
they are simply not logic with themselves. since both are the same islamic extremism why condemned one and not the other?
why defend one over the other? their killings are more halal? LOL!!!

especially for M8ers who are allied with shia extremism only seeing extremism among the sunnis! salafis or hezbis are the same... LOL!!!!

you know nothing about democracy! you want the dictatorship of your mullah!

Hang them immediately, especially if they are Hizbollah members !