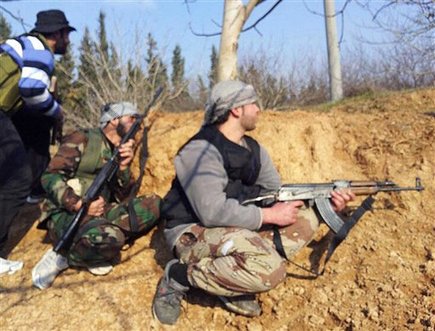 Islamist rebels and Kurdish militias have ceased hostilities in the northern Syrian city of Ras al-Ain after sealing an accord that will see them fight together against the regime, activists said Tuesday.

Intermittent and sometimes deadly clashes have taken place between the two sides since rebels entered the majority Kurdish city, located on the border with Turkey, several months ago.

A statement was issued at the weekend detailing the terms of the final accord between the rebel Free Syrian Army and the Kurdish popular committees.

A Kurdish activist from Ras al-Ain confirmed to Agence France Presse over the Internet on Tuesday that "there have been no confrontations following the agreement."

"Hostilities ended between the two parties a week ago and yesterday things were calm. The number of battalions in the city has decreased a lot and those that remain are stationed at the entrances," he said, giving his name only as Hevidar.

Sunday's agreement, which was brokered by prominent Christian dissident Michel Kilo and other opposition activists, calls for the "complete withdrawal of military forces and displays of arms from the city", said the statement.

Ras al-Ain would be governed by a civilian council, which would also manage the border crossing with Turkey in accordance with both parties, the statement added.

The Kurdish fighters and rebels also agreed on "cooperation and coordination between the Free (Syrian) Army and the people's protection forces to liberate cities that remain under regime control," it said.

Look at that! you can work things out without killing each other. What concept!

The Kurds only fight defensively, if one was to oppress the Kurds then they would fight. The last the Kurds would do is go fight on the front lines with islamists . especially ones that have been attacking them the last couple months.

Why don't you go there in the first place, gabby?

there is no "political" solution with ASSad and his thugs...that's like trying to find a political solution with hizbocrap...look how well that is working out in Lebanon...

Will you join me?

If I could I would help the Kurds.