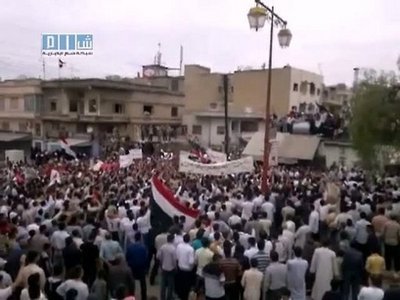 At least 15 people were killed in a Syrian crackdown on pro-democracy protesters, activists said Monday, as the U.N. condemned the "shocking" brutality of President Bashar al-Assad's regime.

Dozens of tanks for a second straight day circled towns and villages in the Homs area, north of Damascus.

At least 15 people were shot dead on Sunday and Monday in Rastan and Talbisa, towns in the flashpoint central region of Homs, an activist told Agence France Presse, declining to be identified for security reasons.

Among those killed was "a little girl called Hajar al-Khatib."

"Two bodies were found at dawn on Monday in the Baba Amr neighborhood of Homs," which the security forces had closed off with several roadblocks, said the activist, who said he had a list of names.

Police were continuing to sweep the region as hundreds of people wounded in the crackdown were hospitalized in the nearby city of Hama due to the roadblocks.

State news agency SANA said four soldiers were killed and 14 wounded by "terrorist groups" in Talbisa on Sunday before some were arrested and a large quantity of weapons seized.

Activists said protesters took to the streets of Hama and Saraqeb, near Idlib in the northwest, during the night to call for the downfall of President Assad's regime.

Hundreds of people also marched on Sunday in Douma and Jdaidat, on the outskirts of Damascus, chanting "Allahu Akbar" or "God is greatest," said Rami Abdul Rahman, head of the London-based Syrian Observatory for Human Rights.

On Facebook, Syrian pro-democracy activists on Monday called for protesters to burn pictures of Assad.

The latest bloodshed came two days after security forces killed at least 12 protesters in dispersing demonstrations against Assad's regime, according to activists.

More than 1,000 people have been killed and 10,000 arrested since the revolt began, human rights groups say. Syrian authorities say 143 soldiers, security forces and police have been killed.

On Monday, the U.N. rights chief Navi Pillay condemned the crackdown on Syrian protesters, saying the actions were shocking in their disregard for human rights.

"The brutality and magnitude of measures taken by the governments in Libya and now Syria have been particularly shocking in their outright disregard for basic human rights," Pillay told the U.N. Human Rights Council.

"Resort to lethal or excessive force against peaceful demonstrators not only violates fundamental rights, including the right to life, but serves to exacerbate tensions and tends to breed a culture of violence," Pillay said.

The U.N. High Commissioner for Human Rights also renewed a call to the Syrian regime to allow a fact-finding mission to visit the country.

On Monday, U.S .ambassador Eileen Donahoe also slammed Syria for its refusal to allow in the mission.

"We note however, whereas the commission of inquiry has been afforded access to Libya, the Syrian regime's refusal to afford similar access is intolerable.

"We call on the Syrian government to expeditiously admit OHCHR (Office of the High Commissioner for Human Rights) to the country and allow for an objective and independent investigation," Donahoe said.

Foreign journalists are barred from travelling inside Syria, making it difficult to report on the unrest and verify witness accounts.

The government insists the unrest is the work of "armed terrorist gangs" backed by Islamists and foreign agitators.

It initially responded to the revolt by offering some concessions, including lifting the state of emergency in place for nearly five decades, but coupled this with a fierce crackdown.

The opposition has dismissed calls for dialogue, saying that could only take place once the violence ends, political prisoners are freed and reforms are adopted.