Israel Force Advances towards Wazzani, Does Not Cross Blue Line 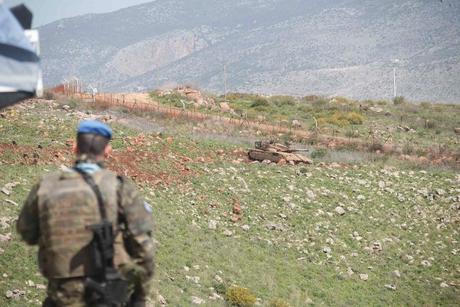 An Israeli force has advanced on Friday towards al-Wazzani border region without crossing the technical fence and the Blue Line, the National News Agency reported.

"Fourteen members and three armored vehicles advanced towards the east bank of the river,” the NNA elaborated.

It added that the members scanned the region for over one hour and then retired to the occupied territories.

Meanwhile, the Lebanese army declared a state of alert as the UNIFIL peacekeeping forces sent troops to observe the situation in the southern region.

Despite U.N. Security Council's resolution number 1701 that calls for respecting the Blue Line and Lebanon's territorial integrity, Israel has repeatedly breached the declaration, violating the southern border and crossing into Lebanese airspace.

Inchallah ykasrookon el yahood hal marra! And be sure, we'll help them finish you from the inside and we won't welcome any bloody hezbo refugee!