Report: Lebanon to Become Leading Country in Energy Production in ME 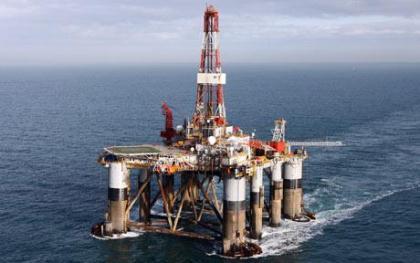 International oil companies are competing over exploiting Lebanon's large energy reserves detected off its coast as analysts say it could redraw the energy landscape of the region.

“The value of the gas and crude oil reserves in Lebanon is worth $140 billion… (Our) company has found (in Lebanon) a quantity of oil that could make the country one of the biggest gas producers in the Middle East,” British newspaper The Times quoted chief executive officer of the British Spectrum Geo Inc. David Rowlands as saying.

This “is a great jostle that has not been witnessed since Libya opened the way for gas exploration in 2004,” Rowland pointed out.

Spectrum Geo had unveiled in 2012 that Lebanon's oil and gas reserves off its coast are of the richest and best in the Mediterranean.

Lebanon's Energy and Water ministry estimates that the country will be able to produce around 90,000 barrel of oil daily by the end of the current decade.

Meanwhile, Malcolm Graham Wood, the oil and gas adviser for VSA Capital said that the gas reserves in Lebanon amount to more than 25 trillion cubic feet.

“I think that the gas reserves amount to much more than 25 trillion cubic feet, and all (gas companies) are interested in this wealth,” Wood told the UK Times.

The deadline for submitting applications will be on March 28 and the Petroleum Authority will announce after three weeks the list of accepted companies then tenders will be launched, which will last until the end of the year.

The country will witness the first oil exploration process in 2015 and it will take a year to enter the production stage.

let us check the commissions being taken by basil and the fpm.

I hope they partition the country before production starts, could you imagine all that wealth in the hands of hizb and salafists and corrupted politicians from all sides because they are nothing but thieves the lot of them, we need a new generation of 21st century democratically aware young politicians in Lebanon we have had enough of the same cave men thats haa been sucking the country dry for generations.

yeah right! if they say $140 billion, it really means its $1 Trillion ... Lebanon should set up government company and drill the gas/oil itself!!!!!

Why commission others to do it, at a small cost of 1 or 2 billion lebanon can set it up independently and take all the money from it!!!!!!!

Giving it to others is discraseful and haram especially for those who spilt their blood protecting Lebanon!

i saw the previous comments from FT and mowaten, but decided it was not worthwhile to reply to these 2 stupid kids.
however, FYI, basil has already done impropriatries in signig contracts not properly tendered, and this is documented :)
so the thief in law is in action.
whatever you say will not change that fact.

Geha my friend, are you by any mean aware that there's a place somewhere named "Geha Junction"?

Lebanon and its non politized citizens will never see anything! War or corruption will devour it all! At the same time the people will vote and cheer the thieves! Khalil Gebran's "Pity the nation" is a perfect description!

"Lebanon has been slow to exploit its maritime resources compared with other eastern Mediterranean countries. Israel, Cyprus and Turkey are all much more advanced in drilling for oil and gas."

This is all thanks to the moronic Hariri policies we had to endure. Thank God for FPM setting this issue on the right track.

Unless we throw away this religious mantra and grade people on their religious affialition we are doomed as a nation with or without energy. Lebanon should be for all based on merticracy. Religion should be in the churches and mosques and the religious people shoudl be at home tending to spiritual needs of people. Not acting that hollywood stars splashing millions on travel and show off. I had been a member of the church since the age of 5, now though I see that religion has been misused and is becoming meaningless. lebanon should rid itself from it and tend to business based on human abilities and standards, not fake religious nonsense.

I Agree with flame, oil is a thing from the past... At least in terms of energy source. It should be used for plastics (no alternative for this). We need renewable energies to light our homes and drive our cars.

Agree with @FT. @Cedar we do not have the capabilities, the money or the technology to drill for ourselves. @Andre is right. while other countries are shifting to renewable energies we are about to spend billions on fixing our old plants and increasing the amount of pollution. This is definitely an apportunity to erase our debt however i really think they should have an open door for consulting from young Lebanese who might have brilliant ideas but instead the old generation will just do what they do best; get hold of it as soon as possible and make tons of money without including anyone. Mafia style.

now for sureeee they will give some to the people .. money is gonna b rolling in...and all r gonna fill there bank accounts..while the people starve and struggle for work

its about time , hope with internal wealth lebanese politicians forget about the carrot and the stick

You guys owe a dept of gratitude to general Aoun and his caucus after all eight years of Change and Reform bloc's weekly meetings generated so much natural gas in that room in Rabieh Lebanon now has the largest reserve in the world. In fact Energy Minister Jebran Bassil is putting a solid framework for exploiting it by commissioning two truck full of empty Soha bottles so he can bottle all that natural gas and export it. Yes boys and girls we're rich! we're wealthy! Yahoo! we're comfortably well off! we're rich! we're wealthy! we're independent! we're socially secure!

You made me laugh. Good humor!

It is good that GMA is here to stay, he is the "state" man that only can stop the mafias from robbing us anymore!!...It is time to get used to this, it's a new era of new Lebanon strong by this man n all clean people in town. All of us must be GMA; making a strong state where no one is above the Law...

i hope its good news for lebanon,i am afraid its not,do u think americans went to destroy irak if there was no OIL?they give a sh... about saddam or wartan its the OIL.
problems and genocide are where there is oil and gas.
120 companies competing for gas and oil, oh my god,i wonder why HAIG the foreign minister of "great" britain came to visit lebanon one or two weeks ago.
qatar prospered because they have one leader and only 300.000 population,in lebanon everyone can be a leader with enough money and a tribe (oil companies can employ anyone from anyside to create havoc)and dont forget we have already at least 1 mio refugees between palestinians and syrians,just imagine if the gas companies arms them?

Mustapha... Very true. Unfortunately, in Lebanon, your fears will most proberbly be true before your hopes.

Mustapha, the picture is changing dramatically. The US is about to become a net exporter of oil. Check the following link.

This could have a dramatic impact on the policies of the U.S. in the ME. As the U.S. grows less dependent on Middle Eastern oil, its propensity to get involved in the affairs of the region will decline. The biggest enemy of an oil-rich Lebanon are the Lebanese politician and us the people who put them in power. All of them, no exception whatsoever.

M8 and M14, seriously take a deep breathe... Look at this opportunity in front of us.
Again Lebanon has a 1 in a million chance to reverse 40 years of war, pain and suffering. A chance to rebuild its social fabric to what it once was in the past.

It all starts with us the people in Lebanon and abroad who can make this change.
The chances are that, given the 20 year track-record of politicians on both sides, we the people will miss out again on the amazing opportunity and the value will be lost to the top 1%...

Question is how do we make this work to our advantage, and where do we start. In answering, you have to look at the big picture. With the wealth that this can bring Lebanon, there's no more debt, and people will have a true chance to live in an affluent economic environment, and if this is achieved, then believe me we'll never need M8, M14 or anything in between again.

The bigger question is whether we'll smarten up this time and seize this chance. Sadly, I think we'll miss this one again, and god knows when another opportunity like this will present itself again....

with the bunch of irresponsible people ruling this country lebanon is soon to become like nigeria where the rulers are rich from the oil and the people are just starving....

1/ it is not in the interest of the political leaders to improve the economic situation of lebanese because they would lose followers.

2/ well off people stop bothering about politics or at least stop following extremists...

3/ well off people tend to westernize which is not in the interest of the islamists groups shia and sunnis...

First, it is in Spektrums interest to make as much fuzz as possible of Lebanons potential in oil and gas. They have made a multi-client seismic survey that they want to sell to oil companies.
Having said that I dont doubt that there is a potential here, but keep in mind that oil discoveries are far more worth than gas discoveries. Gas discoveries takes a lot of investment in terms of subsea infrastructure (pipelines to potential customers). Proximity to payworthy customers are also an advantage. Where are these customers? Israel, Syria, Egypt, Cyprus, Jordan are either at war with Lebanon, have their own gas resources or havent got that much money. To the southwest we have countries like Libya, Algeria, Tunisia which all have abundance of gas resources. To the east we have the gulf nations that are masters of the game.
Lenbanon will surely benefit from this news, but it is not all easy-street. The biggest benefit will be self-sufficiance of energy. No more black-outs.