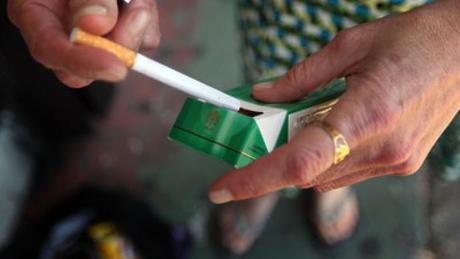 The Federal Board of Revenue ran an advertisement in newspapers, warning that PINE cigarettes were being sold on the market without duty, and lacked mandatory health and underage warnings.

"Therefore all those dealing with these cigarettes will have to face legal consequences, under the applicable laws which may include five years imprisonment, 50,000 rupees ($500) fine," the FBR warned.

Smuggled stock would be confiscated and additional fines imposed, it said.

Asked why the Korean brand alone was being targeted when so many other smuggled cigarettes are sold illegally across Pakistan, a customs official said PINE was the worst offender.

"Other brands are also being smuggled, but are also imported legally, whereas PINE is totally smuggled," the official said on condition of anonymity.

He said authorities would raid shops and warehouses from Monday. Cigarettes were smuggled into Pakistan from Afghanistan and China, he said.

The official had no precise figure, but estimated cigarette smuggling cost the Pakistani economy billions of rupees.

Pakistan has one of the lowest tax-to-GDP ratios in the world, estimated at 9.2 percent. Islamabad's refusal to implement sweeping tax reform was instrumental in the collapse of a $11.3 billion IMF bailout program in 2010.