UNIFIL to Report to U.N. over Israel Violations of Lebanon Airspace 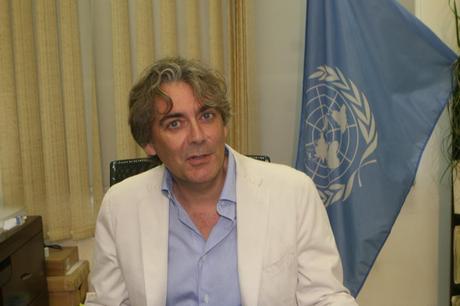 UNIFIL Official Spokesman Andrea Tenenti stressed Thursday that the U.N. Interim Force in Lebanon does not approve of Israel's violations of Lebanon's airspace, noting that UNIFIL will report to the U.N. Security Council on these violations.

In an interview with the National News Agency, Tenenti said the Israeli overflights represent a violation of Lebanese sovereignty and U.N. Security Council Resolution 1701, which ended the 2006 war between Israel and Hizbullah.

"This matter contradicts with our goals and exerted efforts to ease tension, in the aim of securing a stable security environment in south Lebanon," Tenenti noted.

Israel's violations of Lebanese airspace, some of which at low altitudes, have intensified in recent days.

Al-Manar television broadcast Thursday a video showing warplanes' contrails forming a ribbon-like shape in the sky over Beirut at low altitude, in a scene reminiscent of an aerial military exercise.

Also on Thursday, “at 11:35 a.m., two warplanes belonging to the Israeli enemy violated the Lebanese airspace over the town of Kfar Kila, staging a circular flight over all Lebanese regions, before leaving the airspace at 1:15 p.m. over the town of Alma al-Shaab,” added the statement.

to be a UN spokesperson this day must be the job that no one wants. No wonder they picked a guy who is dressed for a quick exit.