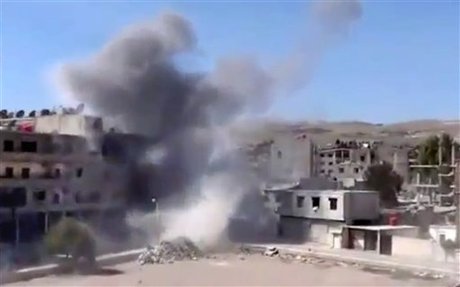 Syria's two-year conflict and the refugee crisis that it has triggered are at real risk of exploding across the Middle East, the U.N. refugee agency warned on Friday.

"I believe that if the Syrian conflict goes on and on and on, there is a real risk of an explosion in the Middle East, and then there will be no way to cope with the challenge from the humanitarian, political and security perspective," said U.N. High Commissioner for Refugees Antonio Guterres.

The United Nations says more than 1.1 million Syrians have fled mostly to Jordan, Iraq, Lebanon and Turkey, and some four million others have been displaced inside their war-torn country.

Guterres -- in Lebanon on the last leg of a regional tour that also took him to Jordan and Turkey -- raised the alarm over the potential security impact the refugee crisis could have on Syria's neighbors.

Guterres urged the international community to step up its efforts to help solve the conflict and to provide assistance to people affected by the humanitarian crisis.

It is "not only a moral obligation" to step up international assistance, but also "something that is essential to preserve global peace and global security", he said.

Lebanon has already seen a spillover of the conflict in recent months, with frequent clashes in the northern and eastern areas of the country.

Syrian troops have also fired shells over the border, while the Damascus regime has accused Lebanon of allowing Sunni fighters to cross illegally into Syria to join the rebels.

Lebanon was dominated politically and militarily for 30 years by Damascus.

Today it is sharply divided over the conflict, with Hizbullah and its allies backing the regime of President Bashar Assad and the Sunni-led March 14 movement supporting the rebels.

Experts have frequently warned of a spillover of Syria's conflict into Lebanon, which the U.N. says currently hosts at least 354,000 Syrians who fled the conflict.