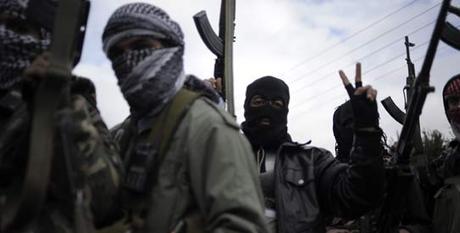 The U.S. Central Intelligence Agency is collecting information on Islamic radicals in Syria for possible lethal drone strikes against them at a later stage, The Los Angeles Times reported late Friday.

Citing unnamed current and former U.S. officials, the newspaper said President Barack Obama had not authorized any drone missile strikes in Syria yet, and none were under consideration.

The targeting officers have formed a unit with colleagues who were tracking al-Qaida operatives in Iraq.

Veteran militants from Iraq are believed to have moved to Syria and joined anti-government Islamic militias there, the report said.

The targeting officers focusing on Syria are based at CIA headquarters in Langley, Virginia, the paper said.

But the agency is working closely with Saudi, Jordanian and other regional spy services active in Syria, according to The Times.

The preparations come as radical Islamic fighters have won a growing share of rebel victories in Syria, the paper said.

The State Department believes that one of the strongest Syrian opposition militias, al Nusra Front, is a terrorist organization that is indistinguishable from the group al-Qaida in Iraq, The Times noted.

"The U.S. Central Intelligence Agency is collecting information on Islamic radicals in Syria for possible lethal drone strikes against them at a later stage"....

LOL so, u will drone them after they collapse Assad? hahahaha

Read the piece ... They are just collecting info so far ...

Guess what FT, I've come to realise that Hezbollah is the better of the 2 .. (FSA/Hez)
God help us all if FSA and co win .

The real terrorists are hezbo and the syrian shabi7a. the al nusra front and others are mere copycats...

Hope the report is true