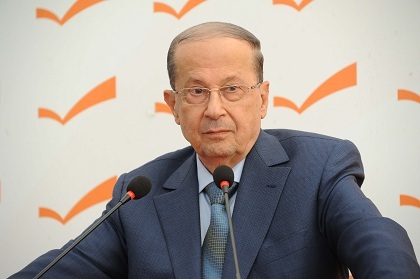 Free Patriotic Movement leader MP Michel Aoun on Sunday stressed that the government's so-called self-dissociation policy towards the Syrian crisis does not mean “allowing these clashes to move to Lebanon,” warning against “foreign interference” in Lebanon.

“I hold the prime minister (Najib Miqati) responsible, because dissociating ourselves from Syria's clashes does not mean allowing these clashes to spill over into Lebanon,” Aoun said during a tour of the Kesrouan district.

"We will not allow an explosion, but the risk lies in a possible foreign interference," Aoun added.

The FPM leader stressed that “it is unacceptable to keep our border with Syria open for gunmen and arms trafficking.”

“It is true that we have dissociated ourselves, but we allowed some people to become heavily involved in the Syrian crisis,” Aoun said.

He warned that “there are several pressures and attempts to blow up the situations,” calling on security chiefs to “shoulder their responsibilities in preserving security, controlling the border and combating extremism.”

Turning to the issue of parliamentary elections, Aoun called for an electoral law that “ensures proper Christian representation without encroaching on the rights of any other sect.”

“The beginning of reform is a law that restores Christians' right to proper representation, and this is what Article 24 of the Constitution stipulates: equal power-sharing” between Christians and Muslims, Aoun added.

“The reason behind the current conflict is that they don't want political reform and are trying to obstruct it in all possible ways,” he went on to say.

The Constitution also calls for the end of the sectarianism...but I guess politicians like to pick and choose which section of the law benefits them, and ignore the ones that don't.

Aoun is a racist and deserter anyway--sort of hard to take him seriously especially since he has taken hypocrisy as a hobby.

I'm sorry FT ... I tried to stop myself from laughing but I honestly couldn't! LOOOOOOOOOOOOOOOL

I am really amazed at the level of brainwashing that they have achieved with you. They should take you as a case study for psychiatric evaluation. Inno walaw, try to keep some self respect at least!

FlameThrower do you get paid by cheque or direct deposit?

Maybe he has no charisma like Obama but at least he has the guts to stand up and voice his opinion,
For the Lebanese without a voice. So be it even if he has to work with h.a so what? This is true democracy at work!!! Love him or hate him at least he has exposed the scums of government in power as well as regional and international......

el Salam 3ala Ismo lal General ... he cannot be compared to mortals ... you should wash your mouth with soap and pary to Claoun for forgiveness! (for those of you who are slow to realize, I am being sarcastic)

I love the "clueless expats" in FT's comment, la 2anno the residents of Lebanon have a full insight on what's going on in Leb.

Politicians are running circles around you, getting rich out of your hard work and you still want to jump and roll over everytime they tell you to. We are all losers as long as we keep these idiots, all of them, in power.