3 Dead as Bus and Truck Collide North of Beirut 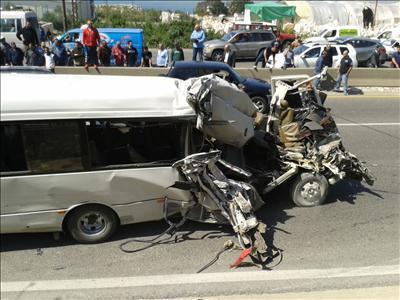 Three people were killed on Wednesday when a passenger bus collided with a truck on al-Bouar highway, north of Beirut, the Lebanese Red Cross and the National News Agency said.

The three were instantly killed when the bus with Syrian license plates hurtled into the truck, NNA said.

Red Cross official George Kettaneh said five people were injured and that four of them were in critical condition.

The impact of the crash left the front of the bus a mangled wreck.

Red Cross ambulances rushed the wounded to hospitals in the area while the police worked on organizing traffic, NNA added.

And who will we blame for this? Syrians? Palestinians? Armenians? Arabs? We have to chose someone to blame because we lebanese never do harm. No never. #Sarcasm

Where are we heading to in this country? No laws whatsoever, people drive without knowing the rules of driving and risk their own as well as other people's lives! What a shame! I'm really embarrassed to say I'm Lebanese now... What a shame!

It's the biggest shame that we are now in 2013 and this country is the most backward country on the planet.
I truly feel ashamed to call my self Lebanese! It's a shame that the animals in charge of this country are allowing all of this to go on, but the bigger shame is the so called "people" that live in this country are happy to see this carry on, and mindlessly keep on electing these animals again and again.
How many people should die on the roads before something gets done?
Such a shame!