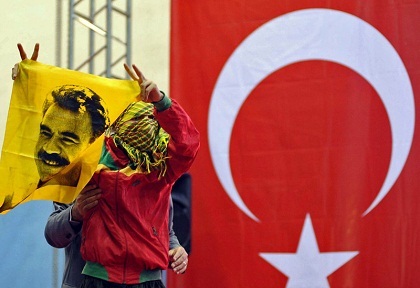 Jailed Kurdish rebel chief Abdullah Ocalan called Thursday for a ceasefire, telling his fighters to lay down their arms and withdraw from Turkey, raising hopes for an end to a three-decade conflict that has cost tens of thousands of lives.

"We are at a stage where guns should be silenced," Ocalan said in a letter written from his isolated island prison cell and read out by a pro-Kurdish lawmaker to vast crowds in the mainly Kurdish southeastern city of Diyarbakir.

The much-anticipated truce call was welcomed by Ankara, which nevertheless said it wanted to see action as well as words.

Ocalan, the founding leader of the outlawed Kurdistan Workers' Party (PKK), said it was time for "politics to prevail, not arms," as he called for armed militants to withdraw from Turkey.

The move caps months of clandestine peace talks between Turkey's spy agency and the state's former nemesis Ocalan, whose movement is blacklisted as a terror group by Ankara and its Western allies.

Prime Minister Recep Tayyip Erdogan and Ocalan, branded a "baby killer" by many Turks, both appear to have staked their political futures on the renewed push to end the 29-year armed campaign for self-rule that has killed some 45,000 people, mostly Kurds.

"A door is opened from armed struggle to democratic struggle," said the 64-year-old Ocalan, known as "Apo" or uncle to Kurds who has been serving a life sentence for treason on Imrali island off Istanbul since 1999.

"It is not the end of the struggle, it is the beginning of a new one," he added. "It is time for unity."

"The language is the language of peace, we must now see it put into action," Guler was quoted by the Anatolia news agency as saying.

Erdogan has said he was putting his faith in the peace process "even if it costs me my political career" in the face of charges by the nationalist opposition that he was guilty of "treason."

The peace talks were launched last year after a dramatic upsurge in PKK attacks against Turkish security forces.

Ocalan's announcement was timed to coincide with Kurdish New Year, or Newroz, and hundreds of thousands of people from across Turkey gathered for celebrations in Diyarbakir.

From the early hours, people poured into the main square, adorned with red, yellow and green Kurdish flags, to hear Kurdish lawmakers read Ocalan's letter both in Kurdish and Turkish.

"I believe in peace," said Ahmet Kaplan, an elderly farmer from a village near Diyarbakir. "I have a son in the mountains and one in the army. It has got to stop, we need an end to mothers' tears."

A giant placard above the stage in Diyarbakir read "Democratic solution, freedom for our leader Ocalan" as thousands waved banners chanting "In peace as in war, we are with you, chief!"

"The light of Newroz burning for peace," declared the headline in the mainstream Sabah newspaper, referring to a celebratory ritual where young men jump over flames in a sign of courage and fertility.

A solution to Turkey's ingrained Kurdish problem could etch Erdogan's name in history, in much the same way the abolition of slavery enshrined Lincoln's memory for Americans a century ago, Murat Yetkin, editor-in-chief of the Hurriyet Daily News, wrote in February.

The ceasefire call is likely to be in return for wider constitutional rights for the up to 15 million Kurds in Turkey, as well as the release of thousands detained over links to the PKK, and safe passage for fighters withdrawing into northern Iraq.

The ceasefire will be a crucial test for Ocalan's influence over the PKK after years of being cut off from the outside world.

At least four previous ceasefire attempts called by Ocalan were rejected by Ankara or torpedoed by hawkish rebel groups, triggering increased violence in the country.

Asked if the new peace process would be successful, Justice Minister Sadullah Ergin told reporters "there are no guarantees".

In a sign of goodwill, the PKK last week freed eight Turkish prisoners it had been holding hostage for some two years.

Under Erdogan, in power since 2002, the Kurdish minority has been granted more cultural and language rights but further reforms were dropped in the face of a nationalist backlash.

The world needs more brave leaders like Erdogan and Ocalan willing to stand up for peace and say no to the mistrust and hatred that leads to violence and misery.

why are you kurdish!??

Hopefully Erdogan will extend his reach for peace to his own borders by telling the GCC and US_NATO war mongers to stand down ...

Erdogan was a bright and shinning star of the middle east when he first came to power but he has fallen prey to the motives of the Zionists and Wahhabi.

I said Erdogan was a brave peacemaker ...

LOL ! I have always portrayed Assad as a blood thirsty dictator ... never have I defended Assad ...

Turkey 3am bthess bell so5on!! Turks know the plan to divide turkey and give the Kurds an independent land, Kurdistan!
will Abdullah Ocalan remain jailed!??

This is bad news for Assad who was counting on his ability to incite the Kurds should the Turkish government decide to interfere in Syria.

zahhet we happy to live with turks problem between both side leaders we dont need independent kurdistan federation better for us we live with turks since 1071 turks kurds are brother sunni muslims.

Arabs can unite all they want and I wish them well. Just leave the Lebanese out of the union, thank you.

Yes ... Phoenicia and the Byzantines should unite too!