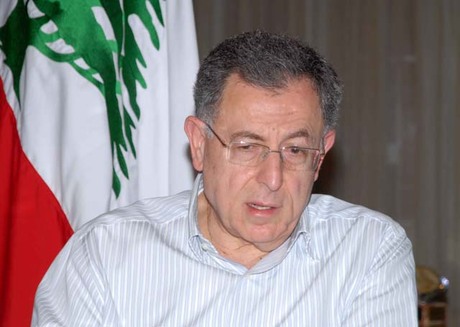 Former premier Fouad Saniora on Friday announced that the government's resignation “opens the door to returning to dialogue,” voicing concerns over the likely postponement of parliamentary elections.

“We believe that this government should have resigned a long time ago and it has opened a new window for correcting its faulty performance and it has also opened the door to dialogue,” Saniora said in a phone interview with Al-Arabiya.

Asked about the electoral law, the ex-PM said: “It turned out that a real camp was seeking to reach consensus over an electoral law and we submitted new ideas so that elections can happen.”

“It seems that it is impossible now to abide by the legal deadline for the elections,” Saniora said.

“We are very keen on dissociating ourselves from what's happening in Syria, but that doesn't mean muzzling opinions,” Saniora said.

A few hours earlier, Miqati announced his resignation after a cabinet session in which he failed to pass the extension of Internal Security Forces chief Ashraf Rifi's term and the formation of the committee to oversee the elections.

His face is melting

Saniora ~ “opens the door to returning to dialogue,”

There is no common basis for dialog ... the M8 and M14 camps are at loggerheads, their positions are largely diametrically opposed. Lebanon must chose between the crony capital neoliberalism of M14 or the nationalism of M8.

Until there is a clear cut mandate there will only be stalemate. With current and coming issues any technocratic or salvation government will soon find itself mired in disputes, hopelessly ineffectual to manage the hard choices Lebanon needs and will need to make.

seek some expert help ... u need it

hahahahaha ... I love it when I am soooo right

what a hypocrit .... hezbis used the pressure of their weapons to make hariri resign without waiting for the elections to come... and you supported them as a brave little hezbi hooker you are...

when a politician is elected even if he is not popular the rules tell to wait till the next elections and defeat him in the ballot boxes so sinioura or hariri just abide by the rules: something you FPMers don t know as little fascists you are...