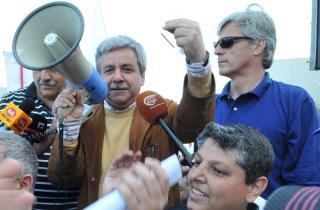 This news comes after reports said two days ago that Gharib was fired for missing classes during his participation in the SCC's protests.

"He will be back to teaching as of Tuesday,” head of the private school teachers association Nehme Mahfoud told VDL, noting that the school's principal, Michel Bitar, was the one behind this decision.

LBCI television had said on Saturday that Gharib was fired for having missed several classes since the beginning of the SCC's protests.

Mahfoud explained to LBCI: “Gharib did not receive any official notice that states he has been released of his duties”.

However, he did not get his paycheck and this means he was fired, he added.

Meanwhile, Bitar refused to discuss this issue in the media but he said: “Since the beginning of the protests, Gharib has disappeared for over a month and was never present at the school”.

"A substitute teacher was assigned because students need to carry on with their studies.” he noted.

After months of nation-wide strikes staged by the SCC, the cabinet referred in March the new wage scale to the parliament for vote.

The cabinet had approved the wage scale last year but has been stalling in finding sources to fund it, leading to growing differences with the SCC, which has been accusing it of negligence.