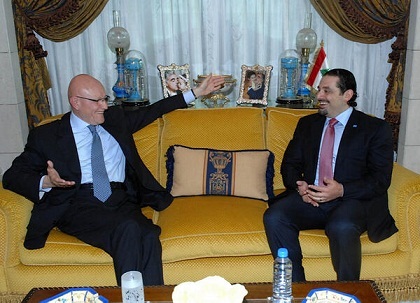 Attention has shifted towards MP Tammam Salam amid reports that he will be named the head of a new government, especially in light of his recent visit to Saudi Arabia.

He later held talks for over two hours with former Primer Minister Saad Hariri on various political developments in Lebanon, most notably the government situation.

Meanwhile, MTV reported that Hizbullah is likely to nominate Salam to the premiership “because he is a consensual and non-provocative figure.”

The Development and Liberation bloc is also expected to endorse his candidacy, it added.

Voice of Lebanon radio (93.3) had reported earlier that Progressive Socialist Party leader MP Walid Jumblat had contacted March 8 officials in order to inquire if they support Salam's candidacy, but he was met with vague answers “that were neither negative nor positive.”

Sources close to the Free Patriotic Movement however told VDL that an agreement over Salam had not been reached, explaining that he is not a consensual figure and is affiliated with the March 14 camp.

OTV later revealed that FPM leader MP Michel Aoun is expected to announce his position on the consultations over appointing a new premier during its evening newscast.

Binding parliamentary consultations to name a new premier are scheduled to be held on Friday and Saturday with President Michel Suleiman at the Baabda Palace.

He tried but they told him you need to have your willy chopped off in order to be PM. (humour les gars, take it easy).

the honeymoon between hizbushaitan and fpm is about to crumble.
aoun will not have the same number of ministers especially he will have to give up seats to the m14 Christians.
furthermore, he will not be able to keep the ministries of telecom and electricity, due to the fact most of the Lebanese do not trust them.
already aoun is threatening hizbushaitan, and soon he will discover he will be on his own to cry in his corner.
his role has ended.

Well said. Instead of reinforcing the Christians Aoun Aiun has actually put them in a weak position by declaring hostilities against the Sunnis And submitting to the Shias. Ompierre Gemayel, Chamoun and now Aoun have mislead the Christians and weaken their positions in this country by rejecting the Sunnis.

I couldn't care less about an expired legislature. The next elections must be held in June, de gré ou de force.

If tammam is meeting Bandar bin sultan who is probably one of the prime sources of financing of al qaeda extrimist sunni terrorism, it means that Bandar is endorsing tammam, hence, if tammam comes up, we wont hear anymore of bab el tebbaneh, of assir, of arsal, of shahhal, of all the hate inducing sheikhs in our mosqs.
HA would be willing to accept him because HA drew its red lines in blood in may 2008 and HA is armed so it is not afraid of anybody. Also HA wants to reach out for the sunnis and is willing to compromise on condition we dont touch his weapons, his security apparatus and his sources of stealing money. They control their own state within Lebanon so they are ready to compromise in regards to controlling lebanon's institutions.
the FPM will not have any problem as long as they are allowed to continue working on the electricity issue which they have earmarked as being the single issue where they can make a difference and gain popularity from.

Ya khafeef, the only compromise the Sunni will accept is they acquire the same amount of dangerous weapons HA owns, and of course Nasrallah the Hariri, Tueni, Gemayel assassin be brought to justice. Otherwise, nothing. Put this in your little brain.

benzona, my post is meant for you. and i am serious abt part 2.
Brucelee. he was refering to me as the little brain.

Actually I had it checked out weeks ago and it's negative. I found out what causes my numerous problems a week ago, it's a rare thing. My DNA is breaking down just like everybody, but when it regenerates it's releasing a protein that inflammates my joints, bones, muscles etc...

I need a new life, wanna help out? You wanna be my Santa? LoL

My sis want to send me to a Buddhist temple for three months. I'm considering it but M8ers on naharnet would be happy without seeing me for this long ^^.

Benzona. the argument of your doc is not very convincing. Your symptoms are exactly a side effect of statins, consider stopping them if you are taking them.

Now back to politics. If you read my post, you will see that I accused HA to have their own illegal statelet within lebanon, which is a clear indication of my non M8 affiliation.
But I think u read the first part, got bored and started insulting based on the first line. Easier for your dinosaur brain, since you need to categorize the world in the dichotomy M8-M14. Unfortunately for you, the world is all shades of grey.

I don't take statins, my cholesterol is fine.
My doc spoke about my case with 80 docs during a lecture in the French city if Nice about two weeks ago. That's where it clicked in his head. Gosh, I saw so many specialists in jan and feb, so many (and costly) tests.... I see improvements, I can walk again but I need to treat the root of the problem... The lifestyle.

I'm willing to leave everything and everyone behind... I'm fed up with Europe (not to mention Lebanon)... Hopefully as soon as I have completely Recoverred.

Back to part two, I liked your analogy, but no.... I know the world isn't black or white, PLENTY of people are against Hezbollah's military hegemony yet they don't vote (not for M14, not for anyone). Yalla kheir.... We'll find out how Lebanon will turn out by summer's end.

If your boss Nasrallah hadnt killed Hariri, he would have paid your tuition fees indescriminatly of your sect.

Syria did it. Not Hezbollah. Syria's assads killed systematicaly every patriot lebanese from bachir to kamal to rafic to gebran to wissam to pierre..... The worst thing that ever happened to lebanon is Assad.

Not to be funny or anything @benzona... But maybe it has something to do with ur work with the Israelis? Some kinda poisoning? Like the Russian case.

Wether on the orders of bashar or not, hizballah killed harriri.

I understand they were friends, but like nasrallah said... They will cut off the arm of anyone trying to take their arms.

Lebanon is only a small piece of the puzzle. Both Sunnis n Shias have a bigger agenda.

Seems as though no one needs Jumblat ... All the quitters and back stabbers Mikati, Suleiman, Jumblat are being isolated ...

No party, M8 or M14 wants to deal with people in positions who will undercut them at the worst possible moment ...

M14 will move ahead and M8 will lick its' wounds but neither will allow much in the way of comfort to back stabbers.

The one question remaining is: What is the fallout for Berri? His MPs have already bucked his leadership. Amal may be in for turmoil.

Jumblat may have gotten part of what he wanted ... the 1960 Electoral Law for elections ... this will guarantee his seat ...

What Junblat is aiming for he has already stated ... The Telecom and Energy Ministries ... he is unlikely to get either ...

Hariri has not forgotten what Jumblat did to him ... He will not risk letting Jumblat do it again ...

Jumblat has already abandoned Mikati, his ace in the hole when he overthrew M14. Jumblat can not expect trust from either M8 or M14.

Jumblat brought M8 to power and Mikati to the Premiership by overthrowing M14 or have you forgotten?

I know Hariri hasn't forgotten Jumblats' treachery ... M14 will sideline Jumblat and certain M8 factions will help him do it.

@mckinl... Jumblatt is the leader of the Druze community. In lebanons system it means he will be dealt with as the representative of the Druze no matter what other politicians think about him.

Second of all... As long as the Christians r divided between m8 n m14, jumblatt will be the tie breaker. Meaning no side can come to power without him. If anything, he's more powerful now than ever.

Lebanons power is based on the outcome of the civil war. Jumblatt got his share and he's not losing it anytime soon. Harriri will also never forget who stood by him after his dad was killed. Don't read too much into Lebanese politics, none of our politicians are going anywhere. Ga3ga3 even got outa jail n aoun came back from exile! ... Soon they'll start digging the oil, n sharing the money ;)

Mckinl ur the only one that doesn't see jumblatt made the necessary political moves to survive n steer away from war.

so i skipped through these comments real quick. has anyone said what they actually think about the article. tammam salam the new PM.

Tamam Salam is the son of a decent man.... but what happened today with M8/11/14 proves they all take their instructions for abroad. Is Saudia better than Iran or Syra? Most probably, but it's still not good enough.

we need a PM with charisma, strong enough to defend the citizen's rights instead of the interests of the factions. Miqati was starting to do it, he got ousted by M8.

if sma7a was successful in his bashar diabolic plot kan mowaten barking on here about suni extremists 24/7 and if you tell him Syria/iran kan al "where is the evidence". We never said she3a killed rafi hariri, if the she3as were polled they would have been overwhelmingly against such an atrocity but Yes iran did kill hariri and the she3a lebanese and arabs are iran's hostage. Where is the interest for the she3a lebanese person for instance in opening a mashkal with 17 million suni syrian? isnt this suicidal? why did not iran exchange lebanese she3a prisoners with their 48 gaurds?: because iran wants to fire the grudge between lebanese she3as and the Syrian people. Iran is miscalculating and will eventualy leave you to face the music.

Whether M8 folks on here like it or not, the fact that hiz/amal endorse tamam salam is a clear sign of political admission that they cant run the show , a subtle confession that things have changed since 2011. To the arrogants on here yes it is a clear sign of weakness in the context of the hegemony agenda, to the patriotic and pragmatic this is good thing for lebanon.

Good luck to our new PM....God bless you Sheikh Saad.