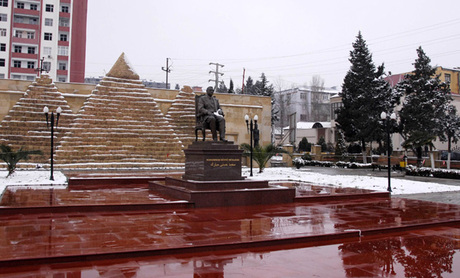 The authorities in Azerbaijan have removed a monument to deposed Egyptian president Hosni Mubarak which had angered government critics, an Agence France Presse correspondent reported Wednesday.

The statue of the former Egyptian leader sitting in an armchair in front of three pyramids was taken away from a park in the town of Khirdalan near the capital of the ex-Soviet republic on Tuesday.

"It was already necessary to remove his monument long ago," local resident Ali Muradov told AFP.

"If his own people didn't want him, why should he stand here in our country?"

Mubarak's statue was replaced on its plinth by a sculpture depicting an ancient Egyptian figure in the park, which is dedicated to Baku's friendship with Cairo.

A small group of opposition activists demonstrated near the monument in February, calling it a symbol of authoritarianism and demanding its removal, after which the area was put under police guard.

The opposition had hoped that uprisings in Arab world could inspire similar protests in Azerbaijan -- a mainly Muslim, energy-rich state that is an important supplier of oil and gas to Europe.

But a series of unauthorized demonstrations in recent months failed to attract large-scale support and were broken up by police, who arrested scores of activists.