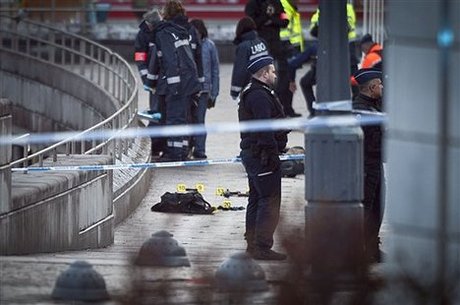 More than 200 police carried out 48 early raids in the northern port city of Antwerp and in Vilvorde just outside Brussels, home to most of the 80 young Belgians known to have departed for Syria in recent months.

The prosecutor's office said six people had been detained for questioning -- one of whom was charged -- and computers, mobile phones and 30,000 euros seized, though no weapons or explosives were found.

Tuesday's police operation was part of an ongoing year-long inquiry to determine whether a group known as Sharia4Belgium "is a terrorist group," an offense that carries a 10-year jail term, the prosecutor's office said in a statement.

The lengthy seven-page statement said the group appeared to be a hardline jihadist Salafist movement with international contacts and that several of its members had signed up to fight with al-Qaida-inspired fighters on the Syrian front.

It is believed to have recruited 33 volunteers for the Syria front, said chief investigator Stanny De Vlieger.

"The investigation shows ... they appear to have participated in combat and even in the kidnapping and execution of those they call 'non-believers'," he added.

Belgium is among several European nations concerned over the departure to Syria of hundreds of young Islamist radicals.

Amid reports some 80 Belgians have joined opposition fighters in Syria, authorities have vowed to take steps to prevent others leaving.

The prosecutor's office said that among those arrested in the northern port city of Antwerp on Tuesday was a well-known Belgian Islamist figure, Fouad Belkacem, who was charged later on Tuesday.

Belkacem was the spokesman for a group known as Sharia4Belgium that favored installing Islamic law in Belgium but which voluntarily announced an end to its existence in October.

Another man who was wounded in Syria had been interrogated by police and was among the six detained.

A 38-year-old Frenchman well-known in radical Islamist circles in Belgium was killed Sunday while fighting Assad forces as part of an Islamist brigade in Syria, a relative told the Belga news agency.

Raphael Gendron left for Syria several months ago to fight with a unit of the 'Falcons of Sham' headed by Abdelrahman Ayachi, who was wounded Sunday and is the son of Syrian-born radical Imam Bassam Ayachi, Belgian media said.

A report released early this month by King's College London said up to 600 people from 14 countries, including Austria, Britain, Germany, Spain and Sweden had taken part in the Syria conflict since it began in March 2011.

The largest contingent was from Britain but based on population, the figures for Belgium, Ireland and the Netherlands were the most significant, with around 200 between them.

Belgian socialists are terrorists themselves.