Karzai Heads to Pakistan to Boost Peace Efforts with Taliban 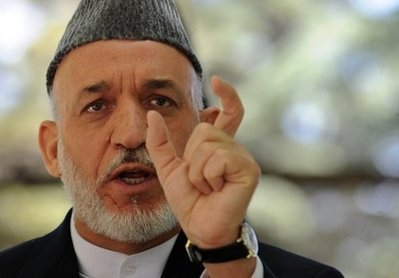 Afghan President Hamid Karzai on Friday flew into Pakistan for talks likely to focus on stepping up efforts to broker peace with the Taliban after nearly a decade of conflict in both countries.

He is the first head of state to visit since U.S. Navy SEALs killed Osama bin Laden in the Pakistani city of Abbottabad on May 2, which has heightened calls within the United States for a peace settlement in Afghanistan.

The visit will also test relations between Kabul and Islamabad, which became more tense after Afghanistan seized on the bin Laden raid as proof that the "war on terror" would be better fought in Pakistan than in Afghanistan.

Karzai, who a Pakistani foreign ministry official said arrived with a delegation of more than 50, is scheduled to head into talks with Pakistani President Asif Ali Zardari, who will then host a banquet for him.

On Saturday, he is due to hold talks with Prime Minister Yousuf Raza Gilani and a joint peace commission involving officials from both countries is also scheduled to meet, before Karzai gives a news conference at 1:15 pm (08:15 GMT).

Few breakthroughs are anticipated, but analysts say both sides will have an opportunity to lay their cards on the table.

Pakistan can ask Karzai about his intentions and those of the United States as regards negotiating with the Taliban, and Afghanistan can seek reassurances from Pakistan that it will not hinder the process.

Pakistan was the main supporter of the Taliban until the September 11, 2001 attacks, after which it joined the U.S.-led "war on terror" and today is locked in fighting a homegrown Taliban insurgency in the northwest.

But its feared intelligence services are thought to maintain links to Afghan insurgents with strongholds on its territory, namely the Haqqani network, one of the staunchest U.S. enemies in Afghanistan, and Afghan Taliban leaders.

"It caused a great deal of mistrust about the peace process between the Taliban and Pakistan," he said.

"The peace process is still on the table, but Pakistan is concerned about direct U.S. contacts with the Taliban. There is a feeling that Pakistan is being bypassed," Yusufzai said.

When Gilani visited Kabul in April, both countries agreed their commission for peace and reconciliation would meet.

"The objective is to facilitate whenever Afghanistan asks us to do so," a senior Pakistani government official told AFP.

Karzai spokesman Syamak Herawi told AFP only that the Afghan president would discuss the "development of the peace process in Afghanistan, cooperation in the war against terrorism and expanding trade and business ties."

In public, Pakistan says that any peace process must be led by the Afghans, but Washington has made it clear that any deal needs to bind in the Pakistanis, given the safe havens for Taliban and other insurgents on its territory.

Afghan analyst Waheed Mujhda predicted that the impending withdrawal of U.S. and NATO troops, in a phased drawdown expected to start from July and wind up at the end of 2014, would top the agenda.

"It is indeed a step forward for talks on the reconciliation and peace process, as well as the war against terrorism," he told AFP.

"The issue of withdrawal of foreign troops from Afghanistan will be the main subject I believe," he added.